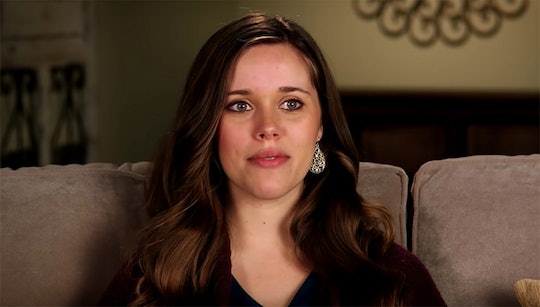 5 Clues That Jessa Duggar Might Be Pregnant, Because Some Fans Are Convinced

Every few weeks or so, another Duggar pregnancy rumor hits the internet. Following speculation that Jill Duggar is pregnant with baby number three, numerous reports surfaced on Wednesday suggesting that Jessa Duggar is the one who is expecting. Confusing, right? Although Jessa has yet to confirm the conspiracy theories, Counting On fans have been collecting evidence throughout the past few months to prove that she's expecting again. That being said, here are five clues that Jessa Duggar is pregnant.

If you've followed along with all the Duggar baby news throughout the past year, you already know that things have been hectic at the family compound in Arkansas. Shortly after Jinger Vuolo announced her first pregnancy in January, Joy-Anna Duggar gave birth to her son, Gideon, in late February. To top it all off, Joseph Duggar's wife, Kendra Duggar, is set to deliver her first baby a month before Jinger is due. It's a lot, to put it mildly, and I tip my hat to Counting On's production crew.

Of course, Counting On fans can't resist indulging in another pregnancy rumor despite the fact that they have *a ton* of Duggar content to dig into at the moment. Adding fuel to the fire is that InTouch Weekly reported on Wednesday that Jessa is four months pregnant with her third child, and that she plans to announce the supposed pregnancy in April. Jessa did not immediately respond to Romper’s request for comment.

But while you wait for Jessa to confirm or or deny the news, check out these five clues that suggests she might become a mom for the third time.

Her Congratulations Video To Jinger Duggar

Shortly after Jinger announced her pregnancy, a few members of the Duggar family took to Facebook to congratulate her on the milestone. Although the focus should have been on Jinger, fans couldn't help but speculate about Jessa possibly being pregnant. Apparently, people took notice of Jessa's "glow" and her loose-fitting dress.

"I must agree with those thinking Jessa is pregnant again. She has the glow and everything. I would be willing to bet she is expecting again," one fan wrote on Facebook.

Jessa does normally wear really loose tops/dresses right before announcing a pregnancy. Then she switches back to more form-fitting tops/dresses. She may be postponing an announcement so as not to take the spotlight away from Jinger at this time. But I'm willing to bet that she will be announcing her 3rd pregnancy within a month or so.

You can check out the video for yourself below:

She Hasn’t Been Active On Social Media

Similarly to many parents out there, Jessa uses social media to share updates about her two kids, Spurgeon and Henry. While it's typical for Jessa to post a photo or video to Instagram every few days or so, she hasn't been active on the platform since Feb. 20. It's worth noting that the Duggars tend to go dark on social media when a big announcement is the in the works. Right before Joy-Anna announced Gideon's birth, for example, the Duggars avoided the internet in the days preceding the big reveal. It's totally possible here that Jessa is setting the stage for a major baby announcement.

Two weeks ago, Jill penned a congratulations message to Joy-Anna that caught the interest of a few fans. "Congratulations Austin and Joy on the birth of little (big) Gideon Martyn," Jill wrote, according to Facebook. "Y’all are already a great parenting team! 1 cousin arrived for 2018... at least 3 more to come!"

Umm, who is the third person Jill referred to in her post? At the time of the post, Kendra and Jinger were the only confirmed pregnancies.

"So does this mean Jessa Seewald is having the 3rd?" one person commented on the post.

Another person added: "Three??? Did yall just spill some beans you weren't supposed to?"

Jill never clarified her message, so it's still possible that the third person could be Jessa.

It goes without saying that a person is under no obligation to post a full body shot of themselves to social media. But a few fans can't help but wonder why Jessa hasn't given fans a glimpse of her stomach area since September 2017, when she took Spurgeon for his first pony ride. In the 10 snaps Jessa shared from the outing, her mid-section is clearly visible in the ninth picture.

Since that day, however, Jessa has only shared pictures and videos of her sons. Hmm.

One of the most interesting rumors to surface about Jessa's supposed pregnancy is a post from an anonymous person in the Counting On Reddit forum. Per the unidentified person, she caught a glimpse of Jessa in February at a group playdate for moms in the Arkansas area.

I have evangelical family members who live near Fayetteville and they run with the same crowd as the Duggars, who they mingle with sometimes. I visited them last week/weekend and my cousin took me and my 1-year-old with her and her kids to a group play date thing at someone's house, and Jessa was there with her boys ... I didn't try to talk to her. But she had a noticeable baby bump. Her shirt was somewhat tight so it was obvious that she was pregnant and definitely past the stage of eating too much for dinner the previous night. She appeared about 3-4 months pregnant.

Of course, you have to take this with a grain of salt as this account is unverified. Still, it's an interesting rumor to consider.