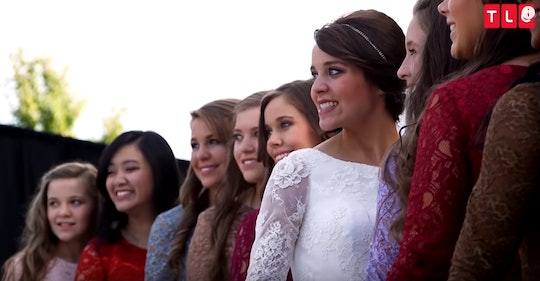 If there's one thing the Duggar family has a lot of, its kids. And how do they get those kids? Get your minds out of the gutter, folks, I'm talking about wedded bliss. The Duggars should be absolute experts at weddings by now, considering they've hosted so many of them and still have so many in their future. As with everything else in their family, the Duggar wedding traditions follow a set of specific rules to make sure everything gets pulled off without a hitch as the bride and groom make their way down the aisle. And towards their first kiss ever, for real.

The Duggar family from TLC's Counting On and previously from 19 Kids & Counting have just run through another spate of weddings and babies. During the down time, before the next Duggar wedding (Josiah Duggar just got engaged to Lauren Swanson) or Duggar baby (Jinger and Jeremy Vuolo are expecting their first baby later this year), let's have a look at some Duggar wedding traditions. Most of which are pretty conservative, of course, as befitting the Duggar brand. They do tend towards as strict religious conservatism as a family, with all of their courtships and side-hugs and no nookie prior to getting married. But a few traditions are actually quite sweet.

When Jinger Duggar married Jeremy Vuolo in 2017, she wore a modest, traditional white dress. But there was a pretty lovely little twist... it seems that whenever one of the Duggar daughters gets married, they add a little piece of their mother's dress to the fabric. The dress was also worn by their grandmother, Mary Dugger, making it an extra special moment for each girl. In Jinger's case, a snippet of the original dress was sewn into the bodice of her gown, while sisters Jill Dillard and Jessa Seewald both opted to carry their own piece of the dress. Jessa carried a rosette in her bouquet, while Jill added it as a handkerchief in hers.

Fans know that one of the biggest moments at a Duggar wedding is always going to be the first kiss. Because this isn't just the couple's first kiss as husband and wife, but it's their first kiss EVER. So emotions are high... and things can get a little awkward (Joseph and Kendra Duggar's first kiss was especially awkward, not only because her father was the pastor who married them and stood, like, a foot away, but also they were rather... enthusiastic). Jessa and Ben Seewald bucked the family tradition by leaving the alter to enjoy the big moment privately.

In the hours before Jinger Duggar married Jeremy Vuolo, Jessa Seewald admitted to TLC that the family has a tradition of running behind schedule for weddings. They apparently just call it being on "Duggar time," and let's give them a break here... that's a whole lot of people to get ready for a big event!

Now I'm not saying this is a tradition or anything, but it looks like the Duggars seems rather partial to weddings in autumn. Six of the Duggar kids are married; Josh, Jill, Jessa, Jinger, Joy-Anna, and Joseph. Four of those weddings took place in autumn. Coincidence? I think not.

The Duggars really love a big wedding. In fact, they don't really do the whole let's just go to City Hall and have some supper kind of thing. It's go big, or go home. The family spends some serious dough on the weddings, according to Jim Bob Duggar, with each one hosting at least 200 guests and the cost hitting around $20,000 per wedding.

I guess if you're going to have a party, it might as well be a wedding, right? And you have to give the Duggars credit... that family knows a little thing or two about weddings.