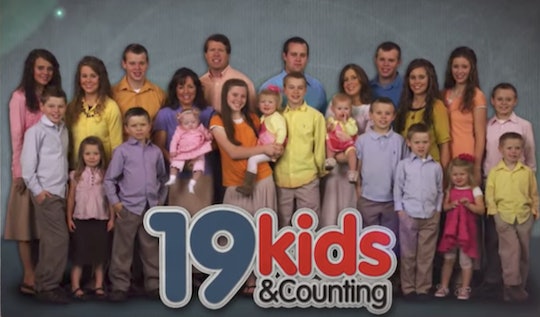 Here's Which Duggars Are Married So Far

With the news that yet another Duggar family grandbaby is on the way for 19-year-old daughter Joy-Anna, it's starting to get really tricky trying keep track of just how many Duggars are planning various baby and bridal showers. Which Duggars are married? Between Jim Bob and Michelle's 19 children, only just over a third of them are actually married — but when you put that in the context that just more than half of the Duggar's children are even over the age of 18, it starts to make a lot more sense.

In their 33 years of marriage, Jim Bob and Michelle have raised 19 children together and have seen four daughters get married, the most recent being Joy-Anna, who married Austin Forsyth in May. The Duggar family also came together for Joseph Duggar's wedding to Kendra Caldwell, which took place earlier in September. Interestingly enough, Joseph and Kendra got engaged at Joy-Anna's wedding. Normally proposing at someone else's wedding is a faux pas, but the proposal timing had the full blessing of both Joy-Anna and Austin.

The first Duggar child to get married was the much scandal-embroiled eldest Duggar child, Josh. Here's a look at all six of the Duggar kids who are married.

Joshua James Duggar, known more commonly as Josh, married Anna Keller in September 2008. The couple have five children together, with their son Mason Garrett Duggar born in September. They've been through a lot in their marriage of almost 20 years: In 2015, Josh Duggar's parents told Fox News that he had molested four of his sisters; Jessa and Jill then publicly outed themselves as two of the victims Josh had abused. Josh Duggar issued the following statement in August 2015:

I have been the biggest hypocrite ever. While espousing faith and family values, I have secretly over the last several years been viewing pornography on the internet and this became a secret addiction and I became unfaithful to my wife.

I am so ashamed of the double life that I have been living and am grieved for the hurt, pain and disgrace my sin has caused my wife and family, and most of all Jesus and all those who profess faith in Him.

I brought hurt and a reproach to my family, close friends and the fans of our show with my actions that happened when I was 14-15 years old, and now I have re-broken their trust.

The last few years, while publicly stating I was fighting against immorality in our country while hiding my own personal failings.

As I am learning the hard way, we have the freedom to choose our actions, but we do not get to choose our consequences. I deeply regret all the hurt I have caused so many by being such a bad example.

I humbly ask for your forgiveness. Please pray for my precious wife Anna and our family during this time.

Jill Duggar and Derick Dillard had a June wedding in 2014. The couple have two children together, having welcomed the newest member of their family, son Samuel Scott, in February of this year. In addition to their two children, both Jill and Derick have expressed their desire to adopt on Counting On, where Derick revealed that he had been adopted, too. The two spent two years in Central America doing mission work.

The next Duggar daughter to get married was Jessa, who married Ben Seewald in November 2014. Their wedding was much publicized on 19 Kids And Counting, with their "you may now kiss the bride" moment televised for the whole world to see. Not like it was their very first kiss ever — oh wait.

It would be another two years before the Duggars had another wedding to celebrate. Daughter Jinger Duggar married Jeremy Vuolo in November 2016. I'm noticing a pattern here... Sure seems like the Duggars like their fall weddings! Jinger and Jeremy don't yet have any children together as they approach their first wedding anniversary.

Joy-Anna married Austin Forsyth this past May, and are already expecting their first child together. The pair were originally planning on have a fall wedding — what seems to be a Duggar family tradition at this point — but the wedding was unexpectedly bumped up to May, leading some fans to suspect that Joy-Anna may have gotten pregnant while they were engaged. Representatives for the Duggars did not immediately respond to Romper's request for comment regarding Joy-Anna's pregnancy.

The latest Duggar to get married is 22-year-old Joseph, who married Kendra Calwell in September. The pair got engaged at Joy-Anna's wedding. Seeing as how they've only celebrated just over a month together as a married couple, no word on any pregnancy announcements yet, but it's a solid bet fans can expect one soon, given how family is so important to the Duggars.