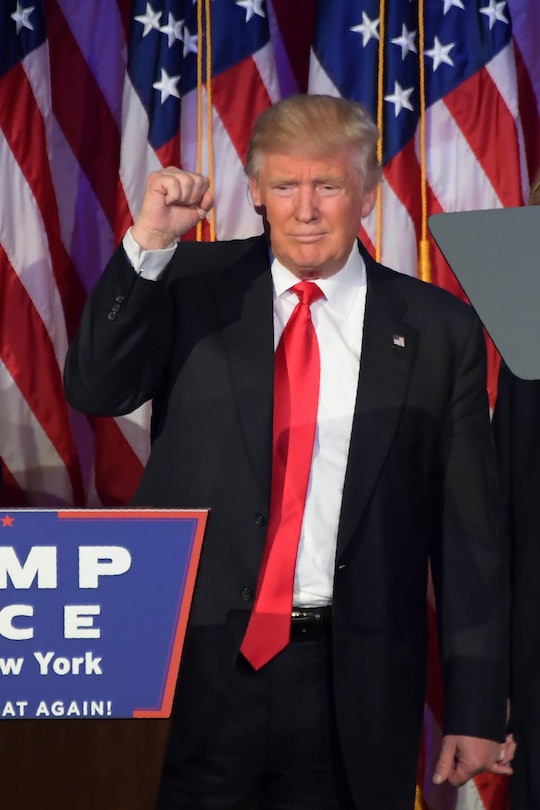 5 Facts To Know About Impeachment, Because That's Where We're At

After Tuesday's election upset, one of the most shocking in American history, people are having a lot of feelings. Donald Trump supporters are naturally celebrating as the GOP candidate has now managed to become the new President Elect. Hillary Clinton supporters, who were so hopeful to see the first woman President of the United States voted in last night, have been left feeling empty. Wondering what went wrong. And wondering where to go next. To that end, here are five facts to know about impeachment right now. Because, you know.

When Donald Trump was voted in by the American people on Tuesday night, he made history as perhaps the least qualified and most divisive president-elect in United States history. Trump has never held office (The Apprentice office doesn't count), and managed to base his entire campaign on his reputation as an outsider. In his victory speech in New York on Tuesday, he gleefully reminded his cheering supporters that he had not run a campaign; it was a "movement." But a movement towards what remains to be seen. Trump hasn't exactly been forthcoming with his grand scheme to "make America great again." Sure, he's mentioned building a wall between the U.S. and Mexico and he's going to "drain the swamp," but what will he do as Commander-in-Chief of one of the most powerful countries in the world other than create catchy slogans for people to chant? If Trump simply spends his days in the Oval Office working on his slogans, for instance, how exactly can he be impeached?

As many voters are busy searching the internet for ways to impeach Trump, petitions have been making the rounds to have him ousted from the Oval Office before he's even begun. While we all love to sign petitions these days, a simple petition will not immediately have Trump impeached. Sorry, guys.

According to the United States Constitution, a president must commit a high crime or misdemeanor to be impeached. Those include:

In other words, the Constitution has kept the definition of what sort of acts a president (or vice-president or federal judge) has to commit to begin the impeachment process.

If Trump does commit an act of treason, for instance (say, he colluded with Russia to hack Clinton's emails or something like that, which there is no evidence of now — he has only joked about it...), the next step would be for the House of Representatives to hold a hearing to find whether the act has been perpetrated. The House Judiciary Committee will put together the articles of impeachment for the House of Representatives to consider and vote on. If the majority vote to approve the charges of impeachment, the official must go to trial in front of the Senate.

If two-thirds of the Senate finds that the official did commit an act worthy of impeachment, that person is immediately removed from office. It's important to note how rare it is for both the House and the Senate to agree to impeach a president; when President Bill Clinton was brought up on charges of perjury and obstruction of justice before the Senate in 1999, he was acquitted by the Senate. He served the remainder of his term.

Let's just say Trump gets impeached. If he does, then vice president-elect Mike Pence would step up to the big chair. And if Pence becomes president, that could cause a whole separate set of issues. As governor of Indiana, Pence has drawn criticism for trying to block Syrian refugees from entering the state (after having already accepted federal funds to help with the transition for the displaced Syrians), openly opposes gay marriage and actually supports conversion therapy, and once gave an entire speech about how evolution isn't really a thing. So let's proceed with caution, shall we?