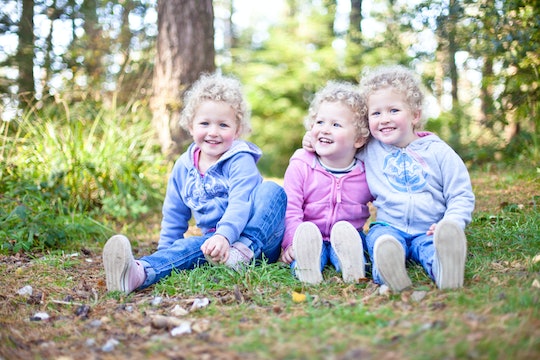 These 5 Fascinating Facts About Triplets Prove Multiple Births Are Magical

There’s no greater feeling than welcoming to the world a bundle of joy… make that two bundles… or maybe even three. Human society has always been fascinated by triplets, and there have been many interesting theories regarding triplets throughout history: For example, multiple births were considered a blessing by the Romans (unless they were girls; historically, Rome wasn’t great on gender equality). Those aren't the only fascinating facts about triplets to know, of course. And while the cultural imagination regarding triplets is fanciful, the real science behind these multiple births is even more astounding.

Recently, there was a viral story of new mother named Judit Minda who gave birth to triplets while being a triplet herself. The Today Show reported that while she was nervous about the complexity of having triplets, she also remembered how much she enjoyed being a triplet, saying, "But most of the time it was amazing. And still is. I have gone through life having two best friends.” The chance of this scenario — of a triplet having triplets — is almost unfathomably rare. However, there is some recent research that suggests that having fraternal twins can be a hereditary trait, according to Science, which may explain Judit Minda's incredible story. Otherwise, your chance of having triplets is, as is discussed below, a near miracle.