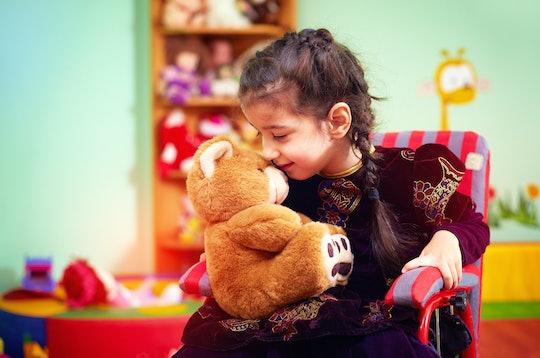 Why I Call My Daughter Autistic

There's a common practice of centering the person, rather than a condition or identity developed, to avoid dehumanizing someone. For example, we say "person with bipolar disorder" rather than "bipolar person". However, as this practice relates to Autism Spectrum Disorders (ASD), the more autistics became represented in the greater national conversation about ASD the more we all began to realize how person-centered language was problematic. That's one of the reasons I use identity-first language for my autistic daughter.

There are a lot of different feelings, most of them B-I-G feelings, about the usage of person-first versus identity-first language for autistic people. All of them seem to want the same thing: for autistic people to be treated with dignity, respect, and acknowledgement that they are inextricable from ASD. So while I will never judge somebody else's decision to use (or not use) the identity-first language I've decided to use it. However, it is very important to me to respect my child's individual autonomy and unique brilliance. These things are a part of her just as much as autism is a part of her. So, I've found that using identity-first language empowers my daughter, Lily, to own her entire self unashamedly.

I do not attribute everything in her personality to the condition, but I am also aware that Lily is inextricable from autism, just as I am inextricable from my allistic (non-autistic) brain. Autism (and allism, for that matter) is pervasive. It is not a disease to be cured or a slew of symptoms to be medicated away. Autism is a part of the way my child's (and my autistic partner's) brain and body. This means that the way they think, perceive bodily sensations, experience emotions, and interpret sensory stimulation are developed in complete symbiosis with autism. Yes, autism is on a spectrum and just like all allistics don't show up in or think the same way, neither do autistic people.

It's important to acknowledge that this is only my experience, and it is not meant to speak for anyone else. In relationships with other people, we should each respect the way the individual we're interacting with identifies. Having said that, here are the reasons why I use identity-first language for my autistic daughter.