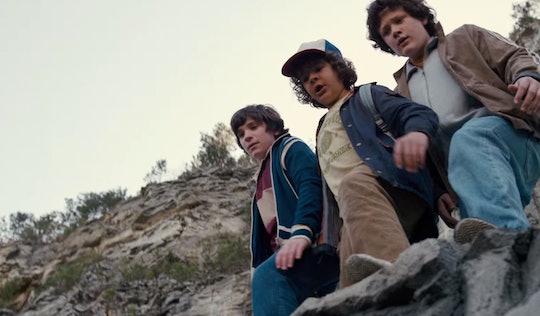 5 'Stranger Things' Halloween Costumes That Are Unique & Beyond Easy

Few shows can claim the immediate love and fandom that Stranger Things earned. With its blend of creepiness and hardcore 1980s nostalgia, the show was an immediate success. If you're still inspired by the adventures of Eleven and her friends, put your creativity to use for some super unique Stranger Things Halloween costumes. Hey, you need something to occupy your time until Season 2 debuts on October 27, 2017.

For the uninitiated, Stranger Things is a Netflix series first released on July 15, 2016. The first season largely concerns the mysterious disappearance of a young boy in Hawkins, Indiana in the early 1980s. The storytelling is fast-paced and engaging, and somehow the show manages to feel like a lost artifact from the '80s. It pulls vibes from Stephen King novels, Steven Spielberg films, conspiracy theories, and even tabletop role-playing games. Plus, there are memorable characters and strong themes of friendship and loyalty. In other words, it ticks all the right boxes for weirdos who love weird shows.

As could be expected, Stranger Things has inspired countless Halloween costumes. Sure, many talented people on the internet can recreate the wardrobes and props from the show with impressive precision. But if you want to show your fandom in a more laid-back way, here are some easy, unique Stranger Things costumes that won't send you to the upside down.