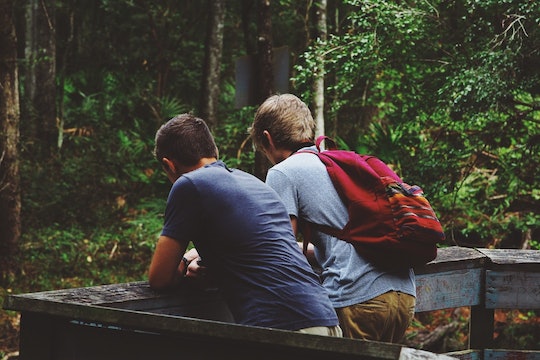 It's almost a given that, at some point, little girls will develop self-confidence issues when it comes to their bodies. This could express itself in the form of being quick to point out their little, minuscule flaws, or even to the point of hating their bodies. Thanks to the "perfect" female bodies we see in the media on the regular, little girls are conditioned from the start to strive for an unrealistic definition of perfection. But little boys are taught to hate their bodies too, even if we aren't seeing it in our faces on a daily basis. It's more of a quiet epidemic, but one that is a part of an idea that is ingrained in little boys from the start.

Maybe we don't pay as much attention to body image in men because the messages to attain bodily perfection for boys don't also come with heaping sides of sexism, rape culture, and systemic, historical marginalization like they do with girls. Like, men generally have a pretty easy go of things compared to women when it comes to the way they exist in society. They're broadly allowed to exist as full humans who aren't solely defined by their bodies and subsequent value as sex objects, for one thing. So yes, there is pressure on men to achieve a fixed concept of physical perfection, but we don't talk about it as much because for them, it's merely insulting, whereas for women, it's insult on top of already substantially sexist injury.

But nonetheless, kids of all genders are slammed from an early age with images and ideas about what "good bodies" look like, with specifications that are heavily gendered. Where little girls have the images of princesses with impossibly narrow waists to contend with, little boys are faced with the chiseled musculature of superheroes. Pretty much any "cool" male figure in the spotlight is incredibly ripped and aggressively applauded for being so. Which, OK, no one is really complaining about, because there's nothing wrong with that kind of body either. But there is definitely something distinctly damaging about celebrating only certain kinds of bodies – especially when little kids are paying attention.

It's only natural for little boys to be looking to the grown-ass men of the world as their role models, at least in the beginning, so that's kind of when the messages they're receiving count the most. On the road to striving for the perfection little boys see in society, they develop eating disorders and body image issues just the same as girls. In fact, one study concluded that one in four eating disorders are experienced by men, as opposed to the previously thought 1-in-10 ratio. And while girls might be victims of body dysmorphic disorder, boys are susceptible to it too. And it is as detrimental as it sounds, causing boys and even adult men to obsessively strive for the perfect muscular form, despite any built-up muscles they already have.

And to be clear, "body image problems for boys" don't begin and end with a single-minded obsession with big muscles; it can mean so many things: Wanting to be taller, or have more or less body hair, or more or less facial hair, or a deeper voice, or to weigh less, or be stronger... There are a million details that make up the socially projected image of the "perfect man" and in being subjected to relentless depictions of this mythological dude-beast (and relentless depictions of men who don't fit that mold being less successful, less well-liked, less attractive side characters), little boys are inadvertently taught to hate their bodies just as much as little girls.

Here's exactly how that goes down:

More Like This
Viral Hives In Children: What Doctors Want You To Know
A Parent’s Guide To Stomach Pain In Kids
Do Parents Really Need To Worry About Their Gas Stoves? Pediatricians Explain
35 Children’s Books Starring Black Characters
What Parents Are Talking About — Delivered Straight To Your Inbox