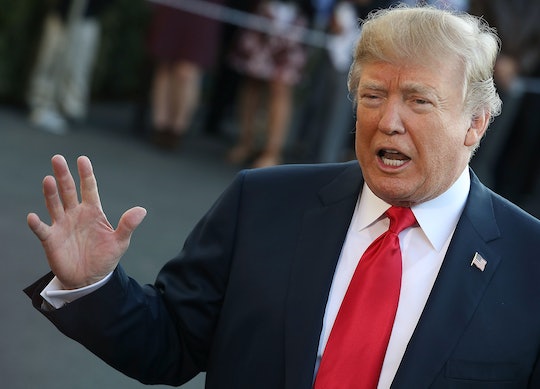 Tuesday was a historic night for Democrats looking to undo the damage caused by President Donald Trump and the GOP. A large number of politicians who were elected to office represented firsts for many cities, states, and communities, unseating Republican incumbents who worked to undo civil rights. But, despite these momentous victories, there is still a long way to go to right the many wrongs of the Trump administration — such as these five ways Trump made America "great again" for millennial moms in the last year.

Of course, Trump hasn't made America "great again" for millennial moms. That's just straight up sarcasm. But it is an effective way to illustrate how he has harmed millions of parents across the country and around the globe. The policies he has either instituted or rolled back have made it much harder for people to access health care, hold employers accountable, earn equal pay, and receive paychecks that accurately reflect the work they've done. For millennial parents, Trump's actions over the last year have put their and their family's financial, mental, and physical health and security at risk.

Don't believe me? Just read on to see how the Trump administration has hurt millions of parents.

In January, Trump reinstated a stricter version of the "Global Gag Rule," the Reagan-era measure that bans foreign organizations from receiving U.S. funds if they provide or even talk about abortion, including medical advice or referrals. So how does the"global gag rule" — also known as the Mexico City Policy — hurt millennial moms? In the past, the measure has not only led to an increase in global abortion rates, but also maternal deaths; those rates are only expected to do so once again. That's because, according to BuzzFeed, more people will seek unsafe abortions, which the World Health Organization estimates causes nearly 13 percent of maternal deaths worldwide.

Millions of people had been holding their breath since Trump took office, waiting to see what would happen to birth control access. With Trump in office, that meant Republicans would ramp up efforts to dismantle the Affordable Care Act. And that meant preventive care would be under attack. Of course, despite multiple attempts, the ACA is still intact, but the GOP still found a way to attack reproductive health. Last month, the U.S. Department of Health and Human Services rolled back a key ACA provision that required employers to provide birth control coverage as preventive care, according to Mashable.

Republicans have tried for years to defund Planned Parenthood. More than 20 states have made moves to cut off funding from the nationwide reproductive health care organization, according to ThinkProgress — some successful, some not. But in April, Trump handed conservative lawmakers a win when he signed a law allowing local governments to deny Planned Parenthood (and other clinics that offer abortion services) federal monies, according to NPR. Problem is, abortions account for only 3 percent of Planned Parenthood's work. So the loss of funding will do far more harm to the millions of parents who use Planned Parenthood for cancer screenings and prevention services, testing and treatment for sexually transmitted infections, contraception, and other health services.

According to the Center for American Progress, Trump had reversed the Obama-era Fair Pay and Safe Workplaces Executive Order in August, harming millennial parents in two key ways. One, without the order, federal contractors are no longer required to be transparent about their pay practices, including hours worked, pay deductions, and overtime earnings. This means that efforts to track the gender pay gap have come to a standstill. Second, these same federal contractors can continue to receive federal funding, even if they have multiple reports of sex discrimination on file.

Last year, the Obama administration issued a federal rule that would have doubled the exempt salary threshold, expanding the number of employees eligible for overtime pay to more than four million. According to the Institute for Women's Policy Research, the overtime rule, which would have went into effect last December, would have benefited single mothers and women of color the most. But the Trump administration continues to delay the once-blocked rule from going into effect, leaving millions of working moms without the overtime pay they deserve.

Since taking office, Trump has done nothing but hurt the millennial parents he has claimed to want to help. These are just five of the ways he has turned his back on the American people, but not the only.