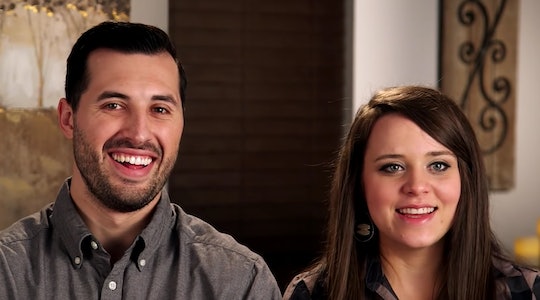 During this past season of TLC's Counting On, fans were able to follow along with Jinger Duggar's pregnancy and journey to becoming a first time mom. And after she gave birth to her daughter in July, it has been such an exciting past few months for fans who follow along with the couple on social media. Seriously, recent photos of Jinger Duggar's daughter Felicity are so adorable and show just how happy the family of three is right now.

It's been almost a year since Jinger announced that she and husband, Jeremy Vuolo were expecting their first child together, according to E! News. Although Jinger expressed in the days leading up to giving birth that she was "nervous" about labor, she prevailed. And on July 19, Jinger gave birth to baby Felicity.

In the months since then, however, fans have watched Jinger's pregnancy journey on this past season of Counting On and saw her give birth in a special that aired on TLC's website (where she revealed she was giving birth in a hospital).

Most importantly, since then, Jinger has shared a lot of photos of Felicity. Seriously, it's hard to believe how much the little girl has grown.

From Her First Photo In July...

Although Felicity was born in late July, the new parents weren't too quick to post photos of their newborn to their Instagram account. Instead, they teased fans with this photo of their daughter, directing everyone to go to their website, where they shared more photos of Felicity.

...To Her Most Recent Photos, Three Months Later.

Felicity turned 3 months old last week, and it's amazing to see how much she's grown. The little girl is super stylish (the outfits that Jinger puts her in are so perfect) and just as expressive as she was when she was born.

Felicity has celebrated some very important milestones at her young age. In the past month, according to CafeMom, Felicity rode on her first airplane and made a trip to Chicago with her mom and dad, which was documented on their Instagram accounts.

Although fans haven't been able to hear Jinger's thoughts about motherhood (her Instagram captions tend to not reveal too much about her personal life), it's clear that she is loving it. The family goes to church together, they visit family members, and they still take the time to take some super adorable family pictures.

But that isn't to say that motherhood hasn't presented itself to be a challenge to Jinger. Last week, she shared a hilarious quote to Instagram about being a mom. "You know you're a mom when you've been washing the same load of laundry for three days because you keep forgetting to put it in the dryer," Jinger wrote on Instagram.

But it's understandable why Jinger might be distracted — Felicity is just so cute!

Given how happy Jinger is being a mom to her baby girl, it's likely that she'll keep on posting adorable updates like these.