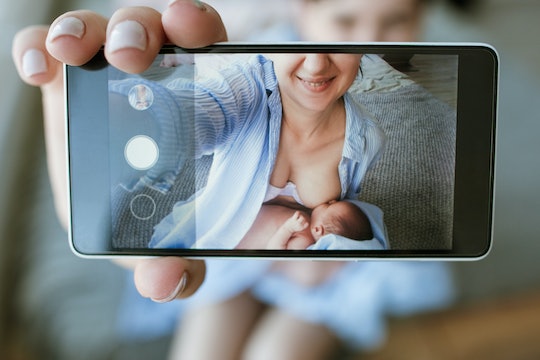 6 Photos You *Must* Take During The First Week Of Breastfeeding

Personally, I didn't love every single second of breastfeeding. Nursing a tiny, needy human being is hard, and taxing, and sometimes painful. That doesn't mean it wasn't an experience to remember, though, or document so that I could look back on it years later. In fact, I'd argue that there are more than a few photos every nursing mom should take during that first week of breastfeeding, if only to remind herself (and others!) that what she is doing is work. Hard, rewarding, incredible work.

Hell, if I'm being honest I have to admit that I took a ton of pictures with my daughter during the first week of her life. Everything was so new and exciting and terrifying and every single moment felt monumental. I took significantly less pictures five years later, when my son was born, though. It wasn't that he was less important, it's just that I had been there, done that, so to speak. I wish I had taken more pictures, though, because breastfeeding was an entirely different experience the second time around. I struggled to breastfeed my daughter, but my son was relatively easy to nurse by comparison and our breastfeeding journey, albeit short, was a very pleasant one. It would've been nice to document that experience, too.

Still, whether I took a few pictures or arguably far too many, I'm thrilled to be able to look back on that first week of nursing life with my kids and remember all the hard work I put into breastfeeding. So while I know it can be hard to whip out the camera or your phone at a moment's notice, here are just a few breastfeeding pictures I think every nursing mom should take during her baby's first week of life: