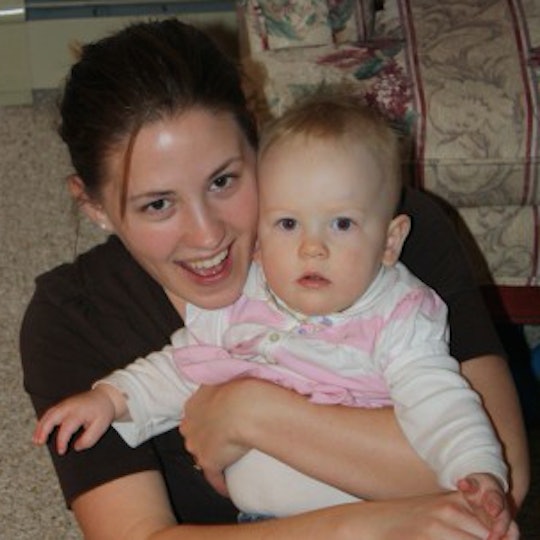 When I found out that I was pregnant about four weeks into my senior year of college, to say it was a shock would be the understatement of my life. And even though I obviously expected having a baby during college to come with its own challenges, I can honestly say that I didn't expect that, in a lot of ways, having a baby during college would actually be incredibly practical, too. There were a lot of surprising benefits that I found in some ways made having my daughter easier than my later kids, who all came along when I was happily married and properly settled like a grown-up is "supposed" to be before she starts popping out kids.

Looking back on that time in my life, I'm still impressed that I handled it all as well as I did. OK, maybe I didn't handle it all that well — I went through some major soul-searching and "what have I done?"-crisis moments, and it took me a good couple of years to fully settle into my new life — but I know that it could have gone a lot worse and I'm so thankful it didn't. In the span of only three months, I went from carefree, newly-minted college student to a married mother-to-be. There were so many unknowns ahead of me, but the one thing I did know, full well, was that I was going to be a mom, and I was going to do everything I could to make that work the way I wanted it to.

And like I said, there were a lot of new challenges along the way to learning to adjust to motherhood, especially while I was still in college, but there were also a few very real and practical benefits to having a baby during college too, such as:

1. A Flexibile Schedule Gave Me Time To Take Care Of Us Both

Being a college student made scheduling my doctor's appointments and ultrasounds incredibly easy. Not once did I have to worry about taking work off to make an appointment. I could easily schedule everything around my class schedule and because I only worked part-time, that made it even easier. And as an added bonus, because my boyfriend (turned husband later on in the school year) was in college too, he was able to come with me to every.single.appointment I had. I didn't fully appreciate what a luxury that was until later, when I was pregnant with #3 and #4 and schlepping toddlers alone with me to my appointments. Let me tell you what, I had it made in the shade with that first pregnancy.

2. I Had More Help Where I Needed It Most

This isn't true for everyone, of course, but for me personally, having a baby during college meant that I could actually qualify for more financial aid. If your baby is due within the academic school year, you can list your child as a dependent on your FAFSA. So for me that meant I could list my unborn child as a dependent, which changed my status to an independent student, instead of being under my parents' income status. Because I had barely any income, I qualified for a PELL Grant, which gave me almost $1,500 towards my college expenses, totally free. (A PELL Grant is not a loan that you have to pay back, but government-funded assistance to students in need for education purposes.)

3. I Had A Great Excuse For Skipping Graduation

This is totally a silly and slightly sarcastic example, but I can honestly say I was grateful to have an excuse to skip my college graduation. I know it's super important to some people, but to me, at nine months pregnant, spending $200+ dollars for the "privilege" of walking in graduation did not sound appealing at all. I was quite happy to skip the whole affair.

4. Morning Sickness Was No Big Deal

No one batted an eye when I darted out of my desk in the middle of class to puke in the garbage can. Was I hungover or pregnant? No one knew — for a few months, anyways.

5. Professors Were A Bit More Understanding

Not everyone was nicer to me just because I was a pregnant student, that's for sure. I got plenty of judgment and downright nasty comments said to my face, trust me on that. But for the most part, I actually found that the majority of my professors in my nursing school program were completely understanding and even nicer to me when I told them I was expecting. One professor let me go home during class when I couldn't stop throwing up, and another worked with me on my request for clinical placements that would be more accommodating for a pregnant student. She made sure to place me with patients that were actually in medically-induced comas in my ICU rotation, which sounds horrible, but at the time, I was having horrible morning sickness and actually losing a lot of weight from throwing up so much, so it made a huge difference to know I could do my rotation, puke in the corner, and my patient wouldn't think any less of me, because he couldn't see me anyways.

I also can't be sure if it had anything to do with my pregnancy, but when I requested a special project in the OB department for my final semester, I received it, and it was awesome preparation for my own labor and delivery. It was like having my own personal OB staff to learn from everyday. I also worked nights in OB, but when I told them I was having trouble keeping up a full class schedule while working nights and being pregnant (and planning a wedding to boot), the manager worked with me to fit in more day shifts into my rotation. School continued to be a priority for me, which was nice, and now that I've been pregnant on the other side of college, I know that in the "real" world, no one really gives a crap if you're pregnant or not. You just have to deal with it.

6. I Had A Worry-Free Maternity Leave

Granted, my "maternity leave" wasn't an actual maternity leave. It was actually a "no one wanted to hire you when you were about to graduate college and could give birth at any moment" situation, but still, it allowed me to not worry about scheduling time off to recover. I did have to schedule job interviews for only a few weeks after birth, and started working six weeks (to the day) after I had my daughter because we desperately needed the money, but looking back, it was the only baby I've had that I actually had full-time to focus solely on my her and napping whenever I could.

Obviously, I'm not writing this to encourage all college students to run out and get pregnant during their senior years, but I'm just saying, if it happens to happen to you, it's not all doom and gloom. There are pros and cons of having a baby at different stages in life and for me, having my daughter in college helped me to recognize that there were ways to make it work that I might not have realized at first glance.