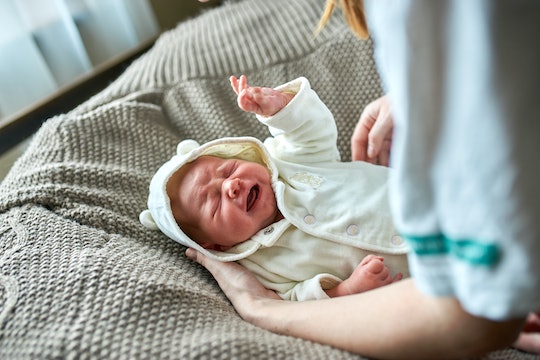 Despite working on the labor and delivery floor of my local hospital and going through OB clinicals in nursing school during my entire first pregnancy, I was completely and totally unprepared for delivery, and it was the one thing I ignored before birth that would've made it so much easier. I graduated with my Bachelors in nursing just one week before I delivered my first daughter, fresh off my OB rotation after I'd worked as tech in the labor and delivery ward. During weekends and on night shifts I assisted the nurses caring for women giving birth, took full care of all the babies, and learned everything from how to swaddle a newborn in seconds to how to quickly change a woman's underwear just moments before she delivered a baby into them. I went into my birth thinking I could just wing it, and I regret absolutely it.

I'd seen enough of labor and birth to know that every single woman on this planet experiences the miracle of life completely differently. I had seen adult women begging for mercy when they were barely dilated and I'd witnessed petite women deliver happy, chubby babies without so much as breaking a sweat. I felt like I knew enough to know that I didn't know enough about birth, and I was totally OK with that.

In my mind, it was best to not have any type of rigid "birth plan" because quite frankly, I didn't know which side of the birth spectrum I'd land on. I didn't want to make plans, because I didn't want to have them ruined. I could be the type to sail through while chanting peaceful mantras or I could be the type begging my husband to knock me out cold — I just didn't know. I assumed going into birth ready for the unknowns would make me better equipped to handle them. I was wrong.

I worked in OB, so I thought I already knew all of the answers to the question everyone asked.

Because I'd seen so many give birth differently, and more importantly, because I'd seen so many women make a birth plan only to be disappointed when things changed, I went the opposite way with my pregnancy. I decided to go into my first labor a bit clueless — on purpose. I knew the basics from nursing school and first-hand experience, but other than that, I kind of blew off any other kind of preparation. My husband and I took the "fast-track" childbirth class, which basically amounted to us stifling laughs with four other couples for five hours and me sprinting out of the room when it was over to go get some tacos.

I worked in OB, so I thought I already knew all of the answers to the question everyone asked, knew which doctors were the best, who gave the best epidurals, and what I should expect from each stage of labor. I thought I knew it all, and I had a really annoying, smug attitude about the whole thing.

Instead of carefully planning or prepping anything, I decided that I'd just go with the flow when my time came. After all, what good would it to do prepare for something I knew I could never even imagine until I went through it? I thought that labor wasn't something you can experience until you're experiencing it so I figured, what's the point? Turns out my non-plan was a horrible one.

When my labor started, things didn't exactly progress smoothly. My water began leaking a week before my due date, and because we lived so far away from the hospital (almost two hours) and I was GBS positive — I had a type of bacteria that can be harmful, even deadly to a baby — my midwife decided that she would break my water the rest of the way to start labor.

I was miserable and exhausted and completely not prepared for how to endure labor mentally.

Almost right away, it was obvious to me (and her, I'm sure), that my body wasn't quite ready to go into labor on its own. Aside from the fact that we got to the hospital at midnight and I'd already been up for 24 hours trying to get my labor going by walking miles (literally) around our neighborhood, my labor stopped and started and sputtered along, exhausting me in the process.

Although I was able to stay mostly comfortable with the tub in my room, when my contractions tapered off sometime in the early morning and my midwife decided to start me on Pitocin, things quickly took a turn for the worst. I was miserable and exhausted and completely not prepared for how to endure labor mentally. I decided I wanted an epidural, only to discover, much to my surprise, that my midwife wouldn't even allow any of her patients to get epidurals. It was yet another reminder that I probably should've gotten this information well before I was seven centimeters dilated.

I know childbirth preparation and birth plans can only take you so far, but I wish I hadn't overlooked all those small ways in which I could've felt prepared for the big day. Having an honest, procedural conversation with my birth team, finding out when I'd no longer be able to get an epidural, discussing with my partner and my midwife what her policies were and what I was comfortable with, deciding whether or not I even wanted a birth plan, and the sheer fact of just knowing that all the births I'd witnessed and assisted on would be nothing like my own would've helped immeasurably. Just winging it didn't make me feel prepared or confident, and I deeply regretted it.

I look back at my first daughter's birth and as amazing as it was to meet her, I still majorly cringe thinking of how easily everything went wrong, simply because I didn't prepare adequately. She was healthy, which was the most important thing, but I definitely should have researched my pain management options, and at the very least, understood that my midwife did not even offer epidurals. I could've done things to make it easier, but I didn't.

I did learn my lesson from my first birth and spent more than enough time preparing for my second labor and delivery, exactly two years and two days after my first. And the experience — thanks to daily visualization and yoga practices — was a completely different one. I knew what to expect, I practiced being in control, and I pulled off a relatively calm all-natural birth the second time around. (It was still hard; I mean, it's birth!) Instead of leaving with memories of how awful my labor had been, I felt like I was the one in control, and it definitely wiped that smug smile off my face from the first time around.