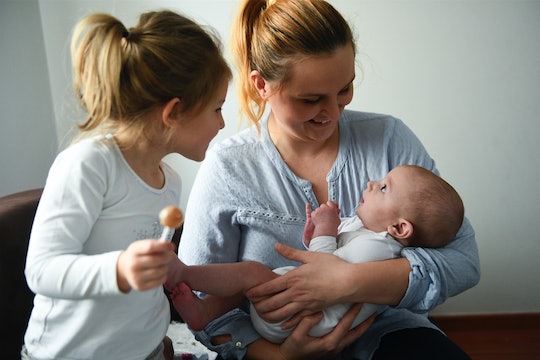 There's a five year age difference between my two children, to the day. Their age gap wasn't planned but, for a variety of reasons, works well for our family. And since I was so focused on having a second baby, I totally overlooked the signs that would've let me know I was meant to have a big age gap between kids. Turns out, though, five years is the magic number that keeps our family balanced.

My partner and I decided to try for our second child when our daughter was just a rambunctious 2-year-old toddler. Our lives were busy, and she took up every bit of my attention and care, but we felt ready and decided it was time to give her a sibling. It only took me a few months to get pregnant, but I miscarried shortly after. All of a sudden, our plan didn't seem so clear. It took two more years, and another pregnancy loss, before I found out I was pregnant with my son.

Because it took so long to carry a second pregnancy to term, I cared very little about an age gap and what it would or wouldn't mean for my family. In the end, all I really wanted was another child. But when I finally welcomed my son to the world and the dust settled, it was obvious that five years was pretty damn perfect for us. So, with that in mind, here are a few signs a large age gap between your kids would work well for your family, too.