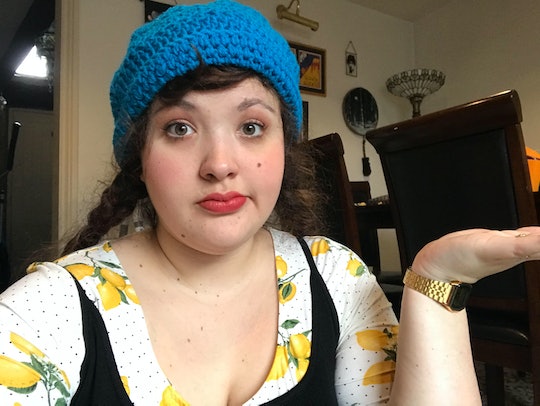 "Two under two is absolutely crazy," a friend recently told me upon hearing the news that I was expecting a second child. "Why would you do this to yourself? Seriously, why?" However harsh her words, she was only echoing the same feelings I'd been battling since finding out I was pregnant again. One child was already so exhausting. One child already made it so difficult to complete even the most mundane of tasks, like washing my hair, doing the dishes, or answering a few work emails. I had been worrying about the gap between my kids for what felt like weeks on end, and — halfway through this pregnancy — I'd be lying if I said I'm still not freaking out a little now. OK, freaking out a lot.

In truth, I never intended to have two children under two. I always knew I'd love to have a second child, someday, but I figured we'd wait until our older daughter was out of diapers. Maybe until she possessed enough language to understand what the arrival of a new baby brother or sister might mean. Maybe until she could walk without falling over every few steps.

Still, I got pregnant. For the second time, I got pregnant while on birth control. For about a month after peeing on that first stick, I weighed my options. I made appointments at the nearest hospital to discuss termination. I cried constantly — knowing that two children was always in my plans, but petrified that having them so close together in age would be more overwhelming than I could physically and psychologically handle.

Now that I'm solid in my decision to move forward with my pregnancy, I realize that a lot of my concerns stemmed from cultural pressures to obsess over the gap between one's kids: Pressures that are incredibly harmful to mothers.

Whenever I speak to fellow parents-of-one who are considering expanding their families, these pressures come to the surface. So-and-so wants to wait until their eldest is in school, so they have more time to dedicate to the newborn. Another person wants to hold off until their first child is potty trained, because the thought of dealing with twice the amount of diapers in a day is f*cking awful. As for this mom, she'd actually love two under two. "A small age gap means a bigger bond," she might say with utmost confidence. "If I wait too long, the older one won't want anything to do with the new one."

There are plenty of assumptions that go with age gap-speak. Whether they're about the likelihood of the kids getting along ("a 6-year-old won't want to play with a baby blob!"), the preservation of Mom's sanity ("you'll lose your marbles if you have them back-to-back!"), or proximity to one another in school year ("your eldest won't want to be seen with a younger sibling in front of all their friends!"), these stereotypes are everywhere, and they're enough to make any parent doubt every potential option while trying to decide what the future of their family looks like.

That said, age-gap pressures, however frustrating and worrying, aren't especially surprising. Moms are pressured to worry about everything: every minute choice they make that may or may not adversely affect their children.

I'm willing to bet that all parents have that one thing that they personally obsess over. Maybe it's their kid's eating habits, so they meticulously read nutritional labels and ban anything with added sugar. Maybe it's their kid's sleep schedule, so they maintain a strict bedtime routine, never allowing for remote deviation. Or maybe it's all about technology. How much screen time is too much screen time, after all?

That we'd be expected to endlessly deliberate about age gaps is no different. Like so many of these pressures, however, it's all too easy to get so enveloped in concerns that you forget to enjoy the moments that are meant to be wholly special.

Moments like the decision to conceive, and all the fun bits with a partner in between that decision and actual conception. Moments like carrying a new addition to the family; a new piece of the puzzle. Moments like introducing a newborn to their older sibling, regardless of whether they're a year apart, or three, or 10. Moments like seeing those two kids grow together, and get to know one another.

There will be pros and cons to whatever age gap we choose (or that our bodies choose for us, in cases like mine). There will likely be arguments and sibling rivalries, whether your children attend the elementary same school or not. Things will, at times, be messy, challenging, and so exasperating that, as a mom, you really do wonder what the hell you were thinking.

Our kids won't ever be perfect. We won't always make the best calls, either, no matter how much we wish we could. In the end, we're all just destined to figure things out as we go along. That's part of being a family. And this will always be true, no matter how big or small the gap in between our little humans.