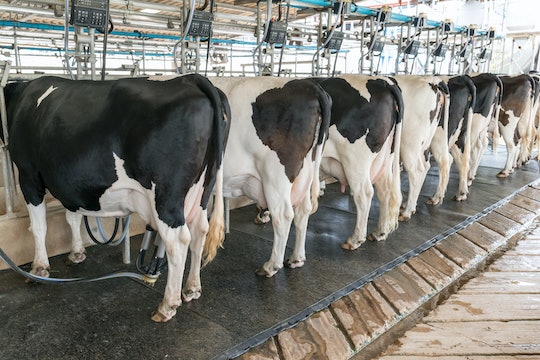 The first time I hooked myself up to a breast pump, I thought the mechanics of it were going to be the challenge. I didn’t realize that it is basically impossible if you do not purchase the bustier that holds the bottles to your boobs. I didn’t know that even with the bustier, the process fully occupies your hands. I didn’t know if I’d be able to make enough milk to keep up with my growing kid, especially since I had to go to bed late and wake up early to pump enough, but I was told adequate sleep was important to maintaining my supply.

Unlike most women who breastfeed, I almost exclusively pumped. I didn’t plan it that way. Because my kid was losing weight at a rapid rate during her first week of life, it was suggested to me that I pump and feed her with a bottle so we knew exactly how much she was getting. I would feed her five minutes on each boob for the bonding, then go pump while my spouse finished the feeding. Since we’re a same-sex couple, this made even more sense: Me pumping allowed our child to bond equally with both of us, or at least, that was my operating theory at the time. We did it that way until I quit after 5 and a half months.

As it turned out, the mechanics of producing milk for my kid weren’t the biggest issue I faced. I figured out how to maximize my supply to nearly keep up with my child’s growing appetite. The much harder part was having to spend a half hour or an hour every four hours connected to a machine, not engaged with my child or my life. And the hardest part of all was dealing with everyone else’s apparent obliviousness to how hard that was, and how caged it made me feel. I wasn’t afraid to tell people in my life how much it sucked (no pun intended), and I did, but that just made me feel worse, especially when I encountered other mothers who seemed to take it fully in stride; no sweat, just part of the deal. The only way I can explain how vastly different their experiences seemed compared to my own is that either they are more selfless people than I am (a strong possibility) or maybe people around them got how hard it is and didn’t say some of the absurd things people actually say to women who are pumping. Here are some of the public at large's greatest hits: