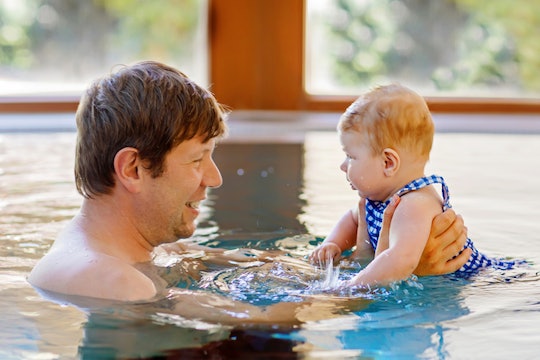 Having A Dad Over 40 Can Affect Your Baby For Life

Babies are expensive. Maybe that's why it seems like every year the average age for people to start having their first child gets pushed back further and further, as potential parents wait to be financially stable enough to afford kids. Many older millennials have partners who are on the other side of 40, and they wonder what that means for their children. Does it make a difference if your baby's father is older? What are some ways having a dad affects your baby later in life? Because, let's face it: 40 is younger than it's ever been, so it's unlikely this trend will decline any time soon.

Last year, a study in Human Reproduction found that the average age of fathers has been steadily increasing since 1952, and that the number of men over the age of 40 fathering children is also rapidly increasing. Not that this is anywhere near a new phenomenon. If you're a fan of history (or just The Tudors), you likely already know all about medieval and early modern marriages of older men to much younger women solely for the purpose of bearing an heir. Times have changed (for the most part), and now it's not only the nobility having children later in life. As NPR reported, roughly nine percent of all births in the United States are to men over the age of 40. That's a huge number, and according to the journal Genetic Medicine, this widespread trend is not without its risks. Children born to fathers over 40 are more susceptible to myriad genetic and chromosomal issues as well as physiologic problems, but they're also oftentimes born with more resources at their disposal than children of younger dads. Whether positive or negative, these circumstances can affect your baby for the rest of their lives, as they face these particular benefits and risks: