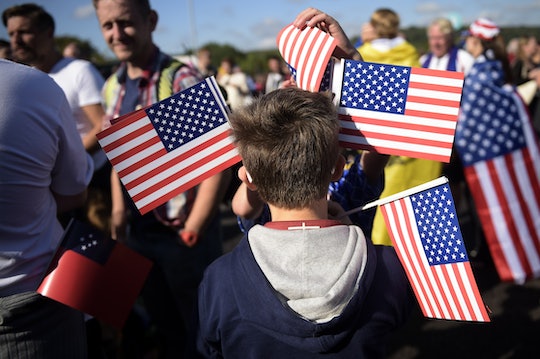 6 Ways To Get Your Kids Involved In Politics

Politics and children are natural playmates. I know it probably doesn't seem like it, but just think about it for a minute. Think about what your kids want on a daily basis. The power to make decisions. They want to win, they want to be right. They want people to agree with them and bow to their will. So, you know... they're basically little politicians, right? But how do you get your kids to become involved in politics?

As a mom of four boys, I can tell you it was a different story with each kid. My three younger guys all ran the gamut from actively passionate to mildly disinterested. It should be noted they all have very strong opinions about one candidate in particular in the 2016 presidential race. (I'll give you three guesses as to which one.)

My oldest son, on one hand, was a natural politician. He was forever taking charge of things with his friends, deciding who would do what and when and for how long. He could argue his way out of pretty much every situation. But beyond those cynical stereotypes we all recognize, he had another quality I tend to equate with good politicians. He was born with natural empathy. Even as a little boy he wanted to help people, especially people he didn't think could help themselves.

If I'm being honest, I would tell you that I had zero interest in politics until my kids came along. At which point I finally opened my eyes and noticed the deteriorating environment, the issues with health care, the troubling economy. I wanted change for my kids. But more than that, I wanted to change things for themselves. And here is how I (tried) to go about it.