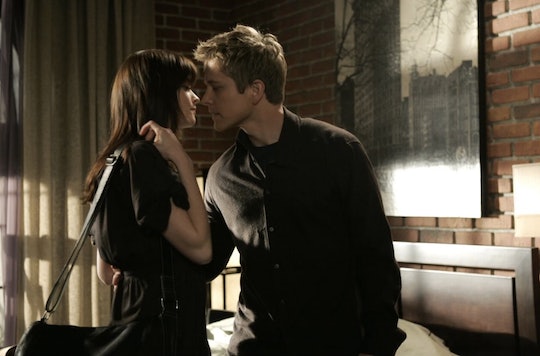 If you haven't yet gotten over those final four words from the Gilmore Girls revival, you're not alone. And really, it was the final two ("I'm pregnant," spoken by Rory) that have garnered the kind of attention that has to be expected when hearing them said by Rory Gilmore. For some, it's too obvious that Logan is the baby daddy, but there are plenty of clues that Logan is the father of Rory's baby on the Gilmore Girls revival, because really who else could it be?

Now, I know there are some theories out there that claim there is more to the story than viewers are getting, considering everything was taking place over the course of a year. But some of these conflicting theories are just too convenient for me. Like the idea that Jess and Rory might have had a secret hookup. Does anyone really believe that such a monumental scene would have been kept from fans? I certainly would've been bummed to miss out on it.

Then there is the theory that the mystery wookiee (or, the guy dressed as one) who Rory had a one night stand with is the dad, but this is Rory we're talking about. She's a little more responsible than that, in my opinion. Surely, she would've used protection with a complete stranger... right?

There might be some theories about the father being literally anyone else, but these clues that Logan is the baby daddy on Gilmore Girls are really all you need to know in order to get behind the Logan prediction, however reluctant you may be.

Near the end of "Fall," Rory met with her own father to have an oddly placed heart to heart — at least, it felt that way at the time. Now, it makes perfect sense that Rory would go to him, asking about how he felt about letting Lorelai raise Rory on her own, because she herself was already pregnant with Logan's baby. And, for all intents and purposes, Logan is basically a parallel of Christopher. They share the same reckless behavior, similar wealthy backgrounds, and the inability to be someone stable for very long. So this would be one more way these two characters are linked.

2. He's The Only One Rory Slept With (That Viewers Know Of)

Rory talked about sleeping with the wookiee back in the "Spring" episode, but that was long before "Fall" came around, when she would reveal that she was pregnant. You'd think she would be showing more at that point if the wookiee was really a logical candidate. Meanwhile, Rory was sleeping with Logan throughout the entire Gilmore Girls revival. Basically anytime that viewers saw Rory with Logan it was because they had just spent a night or a weekend together. So the odds of it being him seems likely.

3. It Would Bring Everything Full Circle

Lorelai foreshadowed the idea of the series bringing everything back around when, after arguing with Emily after Richard's funeral, she shouted, "Full freaking circle," and stormed out of the house. But at the time, viewers probably didn't realize how accurate that statement would come to be.

The revival ended with Rory starting to write a book titled Gilmore Girls, which looked to revisit everything Lorelai went through as a young single mother. Rory is about to embark on that kind of journey now too, so it would be kind of perfect to have Logan be her Christopher as she builds a life for herself and her baby in Stars Hollow, just like her own mother did decades before.

The Gilmore Girls creator spoke to TVLine about the final four words, and made it clear that in the end, it's not really about who got Rory pregnant, but rather about the story that is going to unfold for Rory and her journey amid this new life twist. And although she wouldn't give away the identity of the father of Rory's baby and even said that you can't rule out Paul (really?), she did say that "there are strong indicators" as to who the father could be. And right now, all strong and obvious indicators are pointing to Logan.

5. The Only Other (Real) Possibility Is Currently On Another Show

In my eyes, Jess is the only other legitimate contender to be the father of Rory's baby on the Gilmore Girls revival. I might be a little biased because I love everything about Rory and Jess together, but the revival made that pretty clear too.

Unfortunately, Milo Ventimiglia (Jess) is one of the stars of the new NBC drama This Is Us, so from here on out, his schedule might not allow for another four-part season with 90-minute episodes. Matt Czuchry (Logan), on the other hand, has a bit more flexibility in his schedule now that The Good Wife is off the air.

6. It Would Create The Most Drama

If Jess was the father of Rory's baby, he would likely be a present father, ready to step up and be there and be with Rory. Even Paul, the forgetful but too nice boyfriend of Rory would have probably been excited. If he can show that range of emotion, that is.

But Logan is currently engaged and lives thousands of miles away. He also has a family that never really approved of Rory, so having Logan as the father of Rory's baby creates the messiest, most dramatic, and admittedly juiciest way for the story to play out.

7. There Are Still A Lot Of Team Logan Fans Out There

As much as I like to assume that everyone is as on-board with Rory reconnecting romantically with Jess as I am, there are plenty of Team Logan fans still rooting for not only him, but for Rory to be with him. And because of this, a lot of them see the two as endgame, however long that takes. So even if Logan being the father of Rory's baby creates a messy relationship for them, Logan supporters see it as just a healthy bump in the road along the way to the two of them being together for real.

If the Gilmore Girls revival is renewed for another Netflix installment, Rory's pregnancy is obviously going to play a huge role in the story for that year (or however long the next installment would span), and the father of her baby could be the biggest reveal. And as it stands, Logan is the prime suspect for that major revelation, whether any of us like it or not.