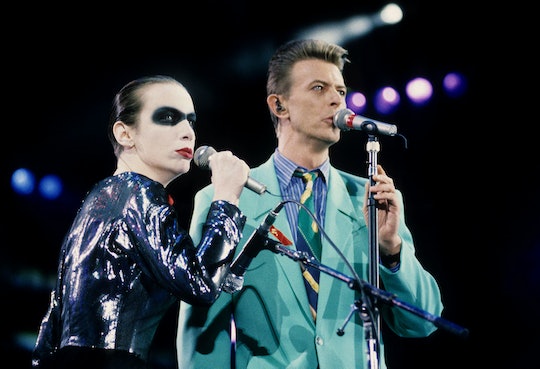 By now, you may have heard that iconic rock star, actor, and all-around art and gender paradigm-destroyer David Bowie has passed away, just days after his 69th birthday. The legendary musician known for his theatrical personas (Ziggy Stardust, Aladdin Sane) and game-changing songwriting fought his battle against cancer for 18 months before his death this Monday morning. Among so many other things for which we'll remember David Bowie, collaborations with other artists ranks very near the top. The Internet is already rife with reactions to Bowie’s death, with hundreds of comments on his Facebook page about how his music touched people’s lives, folks in South London leaving mementos in his honor beneath a colorful mural of him in Brixton, and even celebrities tweeting about his loss.

If you’ve been a long-standing fan of Bowie’s, you’re likely familiar with the fact that he was constantly collaborating with other musicians. From his “Berlin Trilogy” albums which he collaborated on with Brian Eno, to the 1984 collab album Tonight with Tina Turner and Iggy Pop, to his vocal work on Placebo’s “Without You I’m Nothing," Bowie was certainly a musician who knew how to play well with others (and make amazing music while doing so). As we mourn the loss of such a musical talent, I’ve gathered some of Bowie’s greatest collaborations for those who may want to reminisce on Bowie’s influence on and work with others.