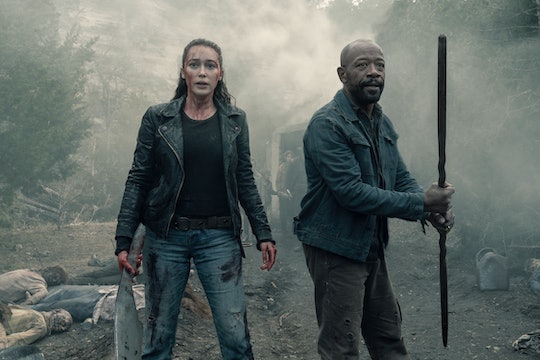 Fear the Walking Dead Season 4 may not have lived up to the excitement and sometimes stressful nature of Season 3, but Season 5 already seems like it’s going to make up for that. The trailer promises new characters, potential villains, and new dangerous territory that Morgan, Alicia, and the others seem intent on exploring. If The Walking Dead taught us anything, it’s that other groups can be dangerous. And some of the predictions for Season 5 of Fear the Walking Dead show just how dangerous this upcoming season might get.

Most fans seem to be in agreement that as long as Alicia lives to see the end of another season, they will be happy. As one of the only remaining members of the original Fear the Walking Dead group, Alicia does have some plot armor, so I don't see her getting killed off and meeting a similar fate as her mom did last season. Other fans are curious about Dwight, who was first introduced on The Walking Dead as one of Negan’s henchmen. He didn't seem to love the idea of following Negan’s ways back then, so there’s a chance he could be a good guy this time. However, whatever his intentions are remain to be seen.

There are a lot of places Fear the Walking Dead Season 5 could go and right now, the predictions are all over the place. One thing I can definitely see coming into play, however, is the introduction of a new big bad or big bads.

Fans Could See A Darker Version Of John

So far, John has been like the much tamer and softer version of Rick Grimes. He wears a signature hat like everyone’s favorite former sheriff, but other than that, he has been open to joining others and although he’s quick with a pistol, he isn't particularly trigger-happy. On Reddit, Sweet_Tooth_VII said that they would like to see a darker version of John. Much like Rick went from refusing to kill humans to agreeing to do so for the greater good, the Redditor could see John turning the same way.

The Twins Will Both Die At Different Points In Season 5

Sarah and Wendell were introduced last season as a bit of an odd couple who called themselves "twins." That was mostly due to the fact that they are so connected and that they have been together so long after the apocalypse began. But Redditor rarkforpresident thinks that the twins could both die in Season 5. I’m not wild about the idea of these two decent characters meeting their makers so soon after they were introduced but, the Redditor reasoned, if they each die at different times, it could help develop the living character a little bit more before he or she dies too.

Dwight Will Be A Villain On 'Fear The Walking Dead'

As one fan pointed out in his YouTube video about Season 5, Dwight might have learned a thing or two from Negan and he could be a big villain this season on Fear the Walking Dead. The fan pointed out that a photo of Dwight from Season 5 shows him holding a weapon over his shoulder and wearing a scarf, not unlike poses we have seen Negan in before. Dwight may have left The Walking Dead with no allegiance to Negan or his former cause, but there’s no guarantee that he’s a good guy.

They’ll Run Into A Group With Bad Intentions

Another fan on YouTube predicted that Alicia’s group of survivors will run into another group this season who have ill intentions. That was par for the course on The Walking Dead, so I wouldn't be surprised if the same thing happens this time on another show in the same undead universe. The fan said that the group could meet someone like the Governor and run into a place like Woodbury that seems like a safe haven but turns out to be more sinister. After the hellish last season, I would hope the group of survivors has better luck than that.

The Group Will Split Up

Another prediction for Season 5 is that the group splits up. Again, this happens all too often on The Walking Dead. I can totally see that being a thing this season, especially if they find a new place to settle or meet someone new. One half of the group might want to keep moving while the other half explores a new potential settlement. I honestly don't know which side would even be the smartest at this point.

Alicia Takes On The Role Of A Leader This Season

If Alicia is anything like her mom, it would only be natural for her to slide into a leadership role this season. She has been through a lot and, as some fans pointed out on Fansided, she could find strength in losing everyone in her family and being the last member still alive. Maybe she won't outright become the leader of the group, but I could see her taking on bigger responsibilities this season.

Madison Will Be Found Alive

A big prediction floating around about Fear the Walking Dead Season 5 is that Madison will be found alive. Fans keep pointing out that her body was never found and I don't know if it’s possible or just wishful thinking among fans, but a lot of people seem to think there is a possibility she will show up again at some point. Right now, anything is possible and if she has the kind of staying power as Rick, she may have actually dodged Death this time around, unbeknownst to Alicia and the other survivors.

Fear the Walking Dead Season 5 premieres on June 2 with a handful of new episodes that are set to feature new characters, new settings, and probably new threats. Hopefully there will be a light at the end of the tunnel after all is said and done. Right now, however, things are looking uncertain for our survivors.