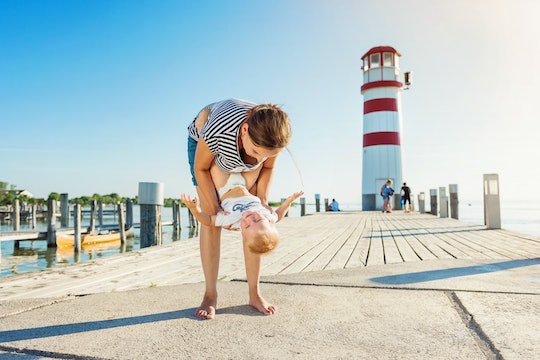 7 Things Every Mom Can Learn From A Lighthouse Parent

There are so many ways to go about parenting another human being. If you're a helicopter parent, you tend to hover over your children and inform their every decision. But if you're a free-range parent, you're probably giving your kids more freedom and space to figure things out on their own. Lately, I've found myself somewhere in-between these two parenting styles. In other words, I'm what's called a "lighthouse parent." And now that I've found some common ground, I think there are things every mom can learn from a lighthouse parent that will help both the child and the mother.

Now I admit, I held onto my helicopter ways pretty tight. I was terrified that if I wasn't around my two children constantly, they would get hurt or fail in some spectacular and ultimately damaging way. Of course I know failure is an important part of self-growth and cultivating resilience. Rationally, I knew I needed to back off and let my children learn on their own. But after enduring a difficult childhood that left me feeling more alone than I care to admit, my fear that my children would experience what I survived pushed all rationality aside. I wanted better for my kids, so I found myself being a little more than overprotective.

The older my kids get, though, the more open I am to stepping back and letting them take the lead. They are never going to learn and grow and become self-sufficient adults if I don't allow them the room to make mistakes, get hurt, and learn how to pick themselves back up and soldier on. And over time I've realized my kids are fine and much tougher than I originally thought. I've seen my daughter bring up a bad school grade without my help. I've seen my son lose a card game and know the world isn't over. I've seen both children fall and endure scrapes and bruises, only to be reminded of their strength. I've seen that, yes, it's OK to embrace a more relaxed style of parenting. I can be the guiding light for my children, like a lighthouse is for a ship, without being the tug boat that pulls them this way or pushes them that way. So with that in mind, here are some other things I think every parent can learn from a lighthouse parent.