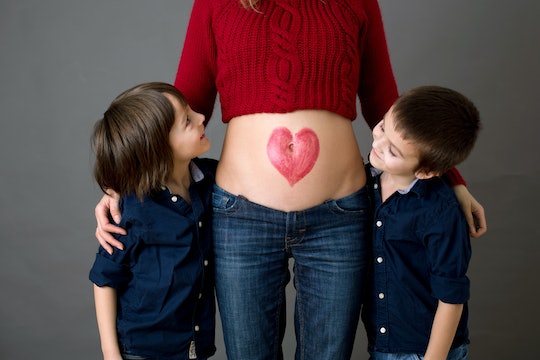 7 Things I Wish I Could Tell My Pre-Baby Stomach

As a kid and pre-teen I felt like my stomach was always bloated and too short for my petite frame. As I got older, my stomach became a guidepost for my thinness during my eating disorder struggles. It is the first thing I body check in the mirror when I'm feeling anxious. My post-baby stomach looks good, but I'd trade my pre-baby stomach for what I've got now in a heartbeat. I took a beautiful thing for granted, which is the main message behind the things I wish I could tell my pre-baby stomach. I honestly had no idea whatI had until I lost it.

I spent a lot of time in my 20s working on my abdominal muscles (with weight training, pilates, and yoga) and was especially drawn to the aerial arts because it focused so much on core strength. I wasn't even happy with my stomach when it looked the best it ever did, which was probably in my late 20s. In fact, I know there were plenty of things I hated about it. With each of my two c-sections, I had to basically start at square one when ti came to my abdominal muscles. After all, they were cut through in order to safely deliver my children and, as a result, felt like jelly the first times I tried to use them. It was humbling and extremely frustrating to feel like years of work had been erased (even though I knew that was not entirely true). It messed with my head.

With a lot of struggle (exercise, and yes, I admit, some messed up eating habits) I'm proud of the stomach I have now. It is almost as strong and muscular as before I had kids, but it will never be the same. There's that damn scar, for one thing. There's the skin on my stomach itself, for another, which seems to bunch in ways that it never did pre-baby. (I mean, when you've stretched to accommodate a human body, where does the skin go when you lose all the weight?) I'd like to take this opportunity to tell my pre-baby stomach that I'm sorry I took it for granted, and that it really was a great stomach. The problem, after all, was not with my stomach. It was with me and my mindset and my inability to recognize just how beautiful my body truly was.