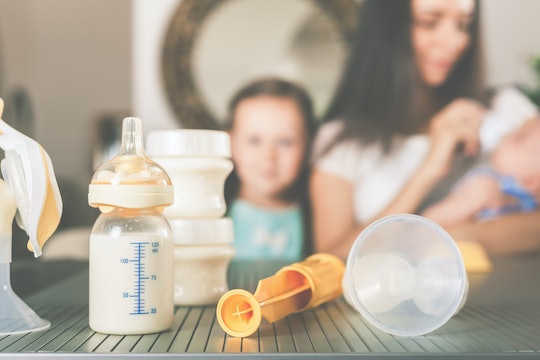 Traveling with breast milk is not one of the highlights of motherhood. There are all those extra things you have to carry, from the pump bag to the liquid gold itself. Then, there are the logistics of keeping your milk fresh so you can feed your baby when you return from your travels. At times it can defeat the purpose of a leisurely trip, because the work required after pumped milk can be so exhausting. All of these details about pumping are things I'm glad I didn't know about traveling with breast milk before I actually had to, you know, travel with breast milk. I'm not sure I would have followed through if I'd known so much beforehand.

I took a few trips without each of my babies when I was pumping, so I became quite the expert at traveling and pumping and storing milk while I was away. It took some missteps and a few instances of what can only be described as "learning the hard way" to realize that the world does not exist to support and assist the breastfeeding mother (the nerve, you guys). Some hotels do not have refrigerators in their buildings that one can even have access to via a hotel worker, so bye bye breast milk. Some airports in America frown upon pumping out in the open (even with a nursing cover) and strongly insist that you do so in the "family restroom." Sadly, that's a true story.

I eventually learned that my pumping essentials absolutely had to include ice packs and an IDGAF attitude. Both served me well. However, before I became an A plus pumping traveler, there was a lot I did not know, including (but certainly not limited to) the following: