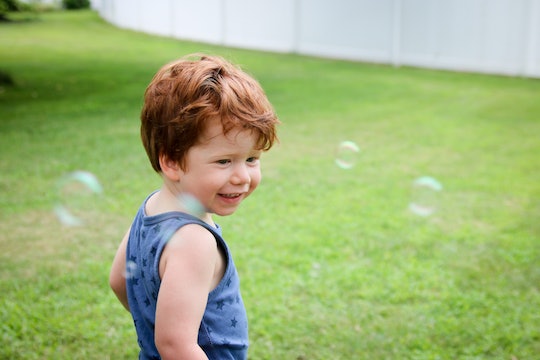 7 Times Your Toddler Will Take Your Instructions Way Too Literally

Confession: I lost my mind the first few times my child actually responded to a question I asked. On one particularly exciting evening, as my partner cooked dinner, I asked our little, “Where’s your tummy?” and he gleefully pointed toward his belly button. It's not as if he hadn't been communicating with me for a while already, but it was one of the first times my toddler literally followed instructions.

Still, you would have thought he spoke in complete sentences and gave me an anatomically correct explanation based on my excitement. I jumped up and down, squealing like some kind of fangirl, then immediately tried to get him to repeat the same response for his grandparents via video chat (to no avail, he doesn’t perform on demand, you guys. He’s got standards and, honestly, I respect them.). Even now, months later, while he now has many more parts of anatomy in his repertoire, he picks and chooses when and how he’s going to respond to our requests to see his nose, toes, and ears. Getting him to show off his tummy is still my favorite though, and he knows it and lords it over me.

Still, there are a handful of requests I can make that I can assume he will take very literally, including but not limited to: