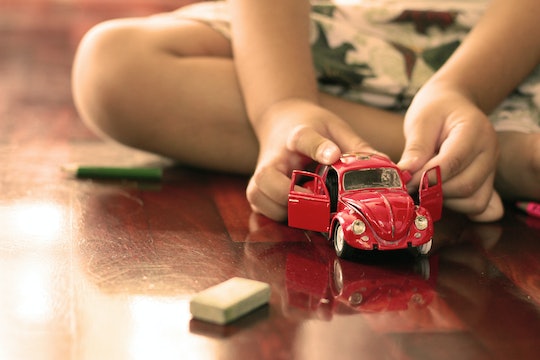 8 Creepy Things Kids Do When They're Playing By Themselves, Because Kids Are Strange

Kids are adorable and curious and wonderful and exciting and any other wonderful adjective you could possible think of. They're also creepy as hell. Whether it's strange things they do in their sleep or strange things they do when their toddlers or, you know, everything they do as a teenage; kids are weird. I didn't realize just how odd kids can be, until I watched my toddler son and witnessed all the creepy things kids do when they're playing by themselves. I mean, once I got passed the excitement of having my kid entertain himself, so I could sit back and relax, I was a little creeped out.

For the first time in my child's life (he's about to turn two) he has his own room. We used to live in a one bedroom apartment and we used to co-sleep, so having his own space for his own toys is a recent development, and one that he is absolutely loving. He plays by himself more than ever before which, you know, my partner and I are loving. It's also kind of creepy, because he is doing things that far too many horror stories have conditioned me to be weary of. Like, he's one creepy thing away from having me drive him to some extravagant cathedral so I can douse him in holy water. That's where we're at, people.

Of course, everything my son has done that I consider creepy, is totally normal. He's just being a kid and kids are just weird, so this is par for the parenting course. Still, it doesn't mean it's any less weird, and I've learned that talking myself down from the proverbial ledge is the best way to combat my worried mind when the following creepy things occur: