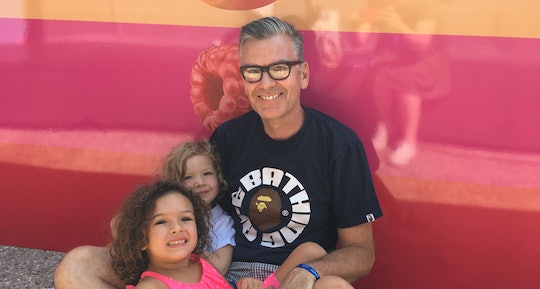 Dads Are *Up* On Kids' Social Lives, If Camp Romper Is An Accurate Sample

When it comes to their friends, kids often live in their own worlds. You don't always know if "Julianna," their new "best friend" from daycare is real, but you do know when someone is truly important to their ascendent social life — rather than play it cool, kids are apt to pick each other up like wrestlers, or run at each other for a massive tackle hug. For parents, watching as your child makes friends, and then besties, and then die-hard friends for life over a mutual love of Tyrannosaurs, is heartening: a reminder that yes, the world is bigger than you, but it loves your kid as much as you do.

This was abundantly evident at the September 22 debut of Camp Romper, a day-long summer camp for families filled with activities, music, and food at Prospect Park in Brooklyn, N.Y. You could loosely describe the event as "Woodstock for children," if Woodstock had bottomless free Popsicles, face painters, and a steady supply of toilet paper. But the lifeblood the events shared was people (kids) living their best life, and hanging with an alarmingly charismatic cast of kindred spirits. Want proof? I talked to eight dads at Camp Romper who told me all about their children's best friends — including one father who thinks his son is a little too attached to a video game, and several whose kids' besties turn out to be none other than their own family members. Put your heart back in its socket and read on to find out what dads had to say about the social lives of our youngest and cutest.