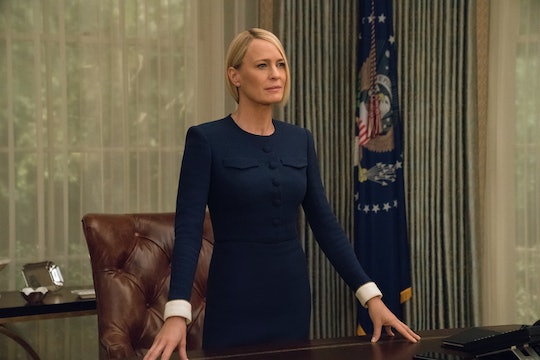 Two Real Housewives franchises, an '80s animated classic reboot, and the end of Netflix's first ever original series are all slated to premiere next month, bridging the gap from endless screenings of the same two Halloween movies (if you're me) to the sappy fun of holiday movie season. These eight shows premiering in November run the gamut from moving and heartfelt to guilty pleasure-worthy and they're ready to keep you entertained all month long — or at least stack up on your DVR until you actually have the time to marathon them all on Thanksgiving weekend.

One particularly high-profile premiere coming down the pipeline is, of course, the final season of House of Cards, now prominently starring Robin Wright following Kevin Spacey's dismissal. The Emmys juggernaut was Netflix's first, wildly successful foray into original content back in 2013 and, for better or worse, it changed the TV landscape as we know it. Season 6 will be cut down to eight episodes, from previous seasons' 13, and it will introduce Diane Lane, Greg Kinnear, and The Assassination of Gianni Versace: American Crime Story's Cody Fern as new cast members. Robin Wright, credited in large part with salvaging the show's final season, graced the cover of Variety last month accompanied by the words "Hail to the Chief." Here's more on where House of Cards plans to go next season, along with seven other shows to keep an eye out for.