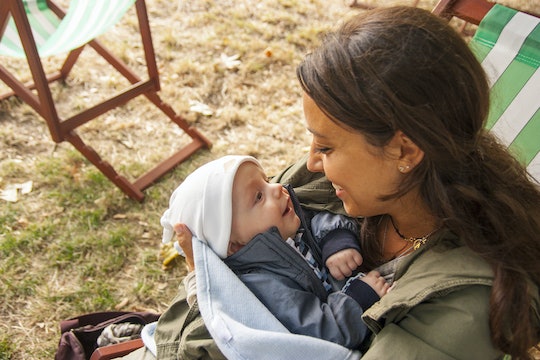 When I found out I was pregnant and started the never-ending journey of parenthood, I didn't set out to practice any particular parenting style, let alone attachment parenting. Somehow, however, I appear to have sufficiently gone through the various stages of becoming an accidental attachment parent. Whoops?

With my parter and I's first, we did everything we were "supposed" to do in order to raise an independent self-soother, including putting the baby in the crib to sleep, giving the baby their own room when we could afford to (when babe was 2 weeks old), bottle-feeding, and even trying our hand at sleep training. Our first (Thing One) rejected the boob, never co-slept willingly, and hated babywearing. Thing Two, on the other hand, adored breastfeeding, co-sleeping, and being held as much as possible. So while it took a while and another child, I eventually found myself doing a few of the attachment parent things.

With m y second I was more attuned to myself and, as a result, more attuned with my son. We still ended breastfeeding before either of us was quite emotionally ready, though, due to external factors. I wasn't a "full time" attachment either, because I worked in a full-time cubicle, part-time private practice. So after suffering through three miscarriages, I vowed that if I got the chance again I would do mama-ing in whichever way baby and my gut told me to. Apparently, my guts are attachment.