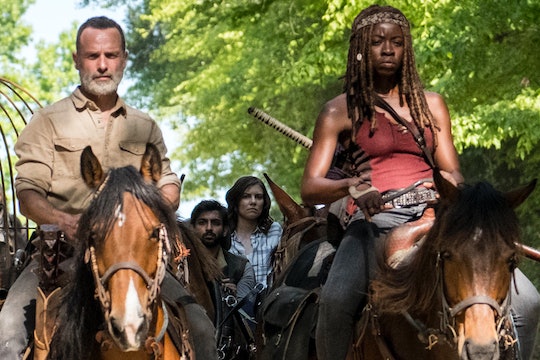 I have been aWalking Dead fan since Season One. Alas, while the past two seasons have a lot to make up for, season nine looks promising as heck. Part of the reason why I'm expecting a lot is because this is the last season for Rick Grimes. I'm also guessing that Michonne, played by Danai Gurira, might make her own exit this season (to focus on her role in The Black Panther franchise). That means this is the last best year to dress as one of TWD characters for halloween. To that end, these 8 Walking Dead costumes are really easy to put together, and more fun than you can shake a barbed wire wrapped stick at.

Sure, you could go all out and do the latex makeup and the elaborate death mask of the walker. In fact, I know that people have done it, and done it well, but that's a ton of work. Last year, my son went as a walker, and I just made him a ribcage shirt and smeared some fake blood and dirt on him and called it good. I went as Maggie. It was easy, because I favor her looks, and have an abundance of tee shirts, black jeans, and boots. I also love a low-slung belt. (The one accessory of the early 2000s that I really wish would come back!) To complete my look, I dirtied myself up, made a few fake scrapes, and boom! Maggie. Most of The Walking Dead costumes are available for purchase as one lot, but much of the time, it's cheaper to source them yourself from your own closet. Here, I show you a mix of both. (Either way, you don't even have to shower!)