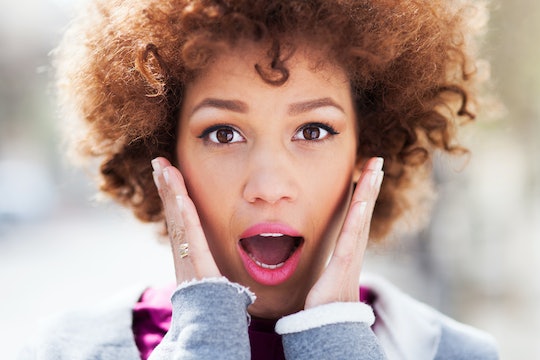 In my line of work, I've come across any number of strange and terrifying pregnancy terms, including "bloody show," "stress-induced incontinence," and "nipple hyperpigmentation," just to name a few. Given how challenging my pregnancies are (from hyperemisis gravidarum to multiple hemorrhoid surgeries), I've always been grateful that I've been spared from one symptom in particular: "lightning crotch." Until this week, that is. Unfortunately, I can now attest to the thoughts a pregnant woman has the first time she experiences lightning crotch.

More Like This
Lightning Crotch Can Actually Tell You These 7 Things About Your Pregnancy
9 Things Not To Say To A Pregnant Woman On Mother’s Day
Therapist Says: Alone Time For Moms Is A Necessity, Not An Indulgence
15 Sweet Ways To Announce Your Pregnancy On Father's Day

According to Today's Parent, this so-called lightning pain is actually a type of pelvic girdle pain. It's a shooting sensation felt in the vagina and is about as awesome as it sounds. It can come and go, occur at any time of day or night, and hurt like a you-know-what. Most moms who experience this electric shock to their ladyparts feel it during the third trimester, as their due dates approach. According to Healthline, there are two primary causes, both related to pressure: that of the baby's head on your cervix or on pelvic nerve-endings. Fantastic.

My daughter, bless her heart, never punched me in the vagina (at least not while in utero). It's only happened the one time so far this pregnancy, at 32 weeks, but it's plenty for me. I suppose there's a first time for everything, and you better believe I was thinking the following and in quick succession: