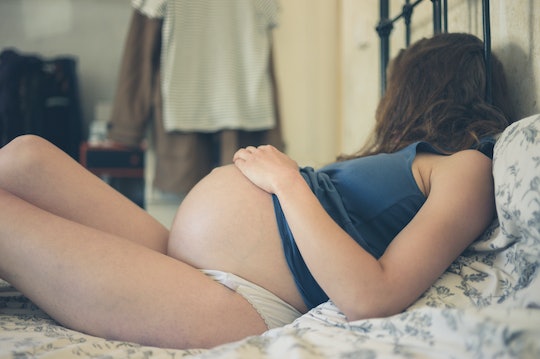 Every stage of pregnancy has its difficult parts. As trimesters go, the first has got to be the worst with its never-ending nausea. Second trimester brings heartburn and headache. By the third trimester, your body is just trying to accommodate that ever-growing baby. Taken a week at a time, however, I feel pretty confident saying that, in my not-so-humble opinion, the last week of pregnancy is the hardest of all. There's something about those last few days of being pregnant that make them seem infinitely longer than those that preceded them.

I was lucky in that I was able to begin my maternity leave the week before my due date. It was a good thing, too, because I was miserable. I began my pregnancy with a low BMI, and I gained the recommended 40 pounds. But as a fine-boned person, carrying all that weight out front really did a number on my back and hips. The worst was the thrombosed hemorrhoids, though. I was in urgent care getting them excised on a Saturday and then in general surgery for a second round the following Tuesday. My husband and I went out to eat with friends a few days later, and as I sat on my doughnut pillow watching everyone drink beer and wine, I realized I'd never been more done in my entire life.

Fortunately, that "done-ness" was actually a sign that labor was imminent. Just when I thought I couldn't take it anymore, my water broke. You'll get there, too, but not before you power through the following challenges of the last week of pregnancy:

More Like This
New Report Shows 80% Of Pregnancy-Related Deaths Are Preventable
Zaya Wade Is Rocking New Long Hair & As Gabrielle Union Put It, She's A "Vision"
How To Increase Your Sex Drive While Pregnant
Are Boy Babies Usually Late? Signs Your Baby May Be Born Late