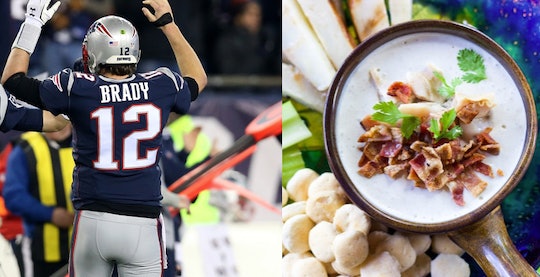 The football season is about to come to a close as ecstatic fans prepare to rally for Super Bowl LII. While the all-time, winningest champs are the Pittsburgh Steelers, with six Super Bowl wins, the New England Patriots (tied with the Cowboys and 49ers) come in second place, with five. For now. So if your game day plans are food-centric, as most are, there are some Super Bowl recipes if you're a Patriots fan that you need to put on your menu ASAP. In terms of honoring your team, these will do the trick while simultaneously satisfying your guests, New England-style.

Of course, when you think of a New England-themed football party, the first thing that probably comes to mind is, arguably, clam chowder. But Patriots fans also know a good lobster roll, clam bake, and probably more seafood dishes that you can fathom are also in order if you're going to watch the big game New England-style. Even if you're a stickler for classic football fare, if you're a die-hard Tom Brady fan you can't help but dig into the less traditional spread. It's like the old adage goes, if it's there, eat it (or something like that). Plus, it's the Super Bowl, so I say go for it.

So with that in mind, here are some traditional and mashup football recipes that are sure to please every Patriot fan on Sunday. Hell, maybe even that other team's fans will enjoy them, too.