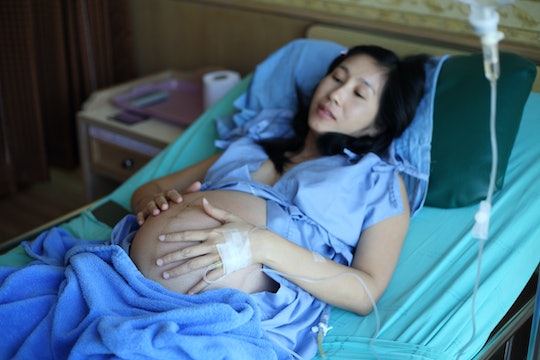 9 Things Every Laboring Woman Thinks When She's Getting Pitocin

If you've done your labor and delivery homework, you've probably heard of Pitocin. Pitocin is a synthetic version of oxytocin (also known as the love hormone). It's often given to a pregnant woman in order to induce labor or, as in my case, to jump-start contractions. It's one of several methods of what's known as labor augmentation, and it's often necessary when labor is stalled. Faced with labor that just isn't progressing, there are thoughts every laboring woman has when she's getting Pitocin. Trust me.

My water broke at 4:30 a.m. on my due date. I had a slow leak of amniotic fluid, so my midwife encouraged me to labor at home. By the time I was admitted to the hospital, I'd already been in labor for more than 12 hours. Everything was progressing slowly but surely, but by hour number 20 the pain was more than I was willing to bear. I asked for my epidural, and because it can slow down labor, the doctor threw in some Pitocin for good measure. At that point, though, all I cared about was getting the damn show on the road.

It worked, too, because nine hours later I was holding my sweet baby girl. That doesn't mean the following thoughts weren't racing through my mind at the time, though: