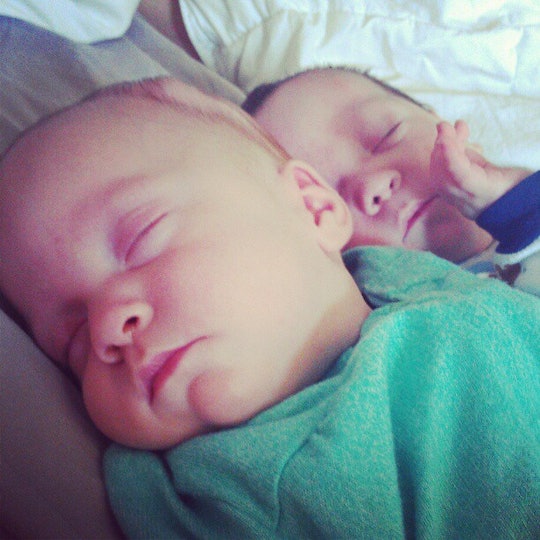 Even long before I got pregnant for the first time, I knew that I would choose a midwife over an obstetrician for my prenatal care. I'd read a lot of scary-sounding stuff about the high rates of unnecessary C-sections and medical interventions in OB-assisted births, and I'd read that midwives tended to be more open to encouraging vaginal birth and drug-free deliveries. Thanks to documentaries like The Business Of Being Born, and books like Ina May Gaskin's Spiritual Midwifery, I'd also bought into the idea that pregnancy and childbirth were completely natural and wonderful, and didn't deserve to be medicalized as though they were illnesses.

I knew people who had given birth at home in birthing tubs, and it honestly sounded so much better than the stories of scared women lying in hospital beds, numb from epidurals, receiving episiotomies or being encouraged to be put on Pitocin drips to expedite their labor. I felt pretty strongly that I wanted to have the most natural, gentle, beautiful, empowering birth as I possibly could, and as far as I was concerned, choosing a midwife was the best way to make sure that happened.

After I got pregnant, booking an appointment with my midwife was one of the first things I did. I was looking forward to having her on my side during this experience, and I was grateful that she was so reassuring and non-judgmental. She explained that she and the other midwives in her practice were available to answer any questions or concerns that may arise, and she seemed to share my sense of confidence that I would have a great pregnancy. As my pregnancy progressed, she told me we would develop a birth plan, and after I'd delivered, she'd be there to oversee my postpartum care, too. I felt pretty certain I was in great hands.

My midwife was kind and capable and educated and experienced, and the other midwives in her practice were as well. But even before we met, I had firmly decided that the care of a midwife was preferable to the care of a doctor in all circumstances. So when it was discovered at my 21-week ultrasound that my cervix was insufficient, and that I would likely not even stay pregnant long enough to reach viability without immediate medical intervention, I learned the hard way that, in many cases, doctors actually are necessary. In many cases, doctors are life-saving.

Not long after our initial meeting, however, my pregnancy started to become complicated. I found out that I was actually pregnant with twins, which meant that I was suddenly considered high-risk. It also meant that, despite my desire to deliver under the care of a midwife, I would ultimately need to be transferred to an obstetrician by 30 weeks gestation. I was disappointed, but my midwife said that many of the OBs she worked with were happy to offer shared care, and she could even be present to assist at the birth. "Besides," she told me, "you are young and healthy. You're about as low-risk as you can be for a high-risk mother."

Nothing was going at all how I had planned, and I was scared and heartbroken.

At follow-up appointments, my midwife told me encouraging stories about all the moms-to-be she'd seen carry twins to full term. In fact, she said, some women even went further than the 36-to-40-week mark considered to be term for twin pregnancies, giving birth to healthy five- or six-pound babies vaginally.

But after the problems with my cervix were discovered, my midwife informed me that she could no longer be my care provider, and because I didn't actually have an OB lined up yet, I would be placed in the care of whoever was currently on-call at the hospital. That doctor would ensure I had stitches put in place to try to keep my cervix closed (called a cervical or transvaginal cerclage), and he would also be the person I would see from now on for clinic appointments. Nothing was going at all how I had planned, and I was scared and heartbroken.

Making things worse was the fact that I turned out to be much less happy with my designated OB than I had been with my midwife. He was brash, callous, and made jokes about my situation that felt cruel given how vulnerable I was feeling. I'd been reassured by others who knew him that he was actually a very competent doctor who really knew his stuff, but I felt like he didn't seem to care very much about what was happening to me. I hated the idea that he would be the person attending my delivery in place of the midwife who I'd imagined would help me have a beautiful birth. But it turned out I needn't have worried about that either: at 24 weeks, I was transferred by ambulance to the high-risk floor of a completely different hospital due to threatened pre-term labor.

The truth is that, in some ways, I'd given up on my pregnancy entirely.

By the time I actually went into active labor a week later, I had given up on my dream of a glorious birthing experience. The truth is that, in some ways, I'd given up on my pregnancy entirely. I hadn't bonded much with the two tiny people floating around in my belly, mostly because I knew deep down that there was a pretty good chance they wouldn't make it. All I knew for sure was that I was really, really grateful for all of the doctors and nurses who did everything they could to make sure that the three of us had the best shot possible to survive that experience. And I am so glad that the medical technology and expertise existed to allow them to do that.

I know, of course, that countless women have incredible, beautiful experiences with midwives. I've seen it happen, and I've heard people rave about their midwife-assisted births, and it's wonderful that the option exists for low-risk mothers. But I can't help but feel like the conversation surrounding prenatal care providers is incomplete, and one which has somehow become extremely skewed. My midwife wasn't bad or negligent, and she certainly couldn't have changed the outcome of my complications. But because I'd been working under the assumption that midwives were more natural or holistic (and therefore better than the big, bad doctors who push C-sections and supposedly don't care about what's in the best interest of the mother and her baby), I didn't realize that for many women like me who have high-risk pregnancies or unforeseen complications, having an OB is a necessity.

Looking back, I wish someone had explained to me that, while it was entirely true that I could still end up having a healthy, complication-free, full-term pregnancy even as a high-risk mom, it was also true that I was more likely to have complications. Perhaps then I could have had a specialist on board who could have been monitoring me from the very beginning — or at least a doctor who I had actually chosen myself. But, knowing what I know now, even if I hadn't been expecting twins, and if I hadn't been high-risk, I'd still choose an OB if I had a chance to go back and do it again.

Even without the added risk of a multiple birth and premature labor, pregnancy and childbirth are still inherently risky, and healthy women who reach their due date can still experience complications that couldn't have been anticipated, like problems with the placenta or umbilical cord during delivery, for example, or unexpected fetal distress. It's true that women have been delivering babies for thousands of years without any assistance from the medical establishment, but it's also true that a lot more mothers and babies died as a result.

A woman's birth plan is ultimately a personal choice, and I definitely do not begrudge anyone who chooses a midwife, or an out-of-hospital birth. I also understand that many women have struggled with traumatic hospital births, or with negative experiences with their OBs, and that is totally heartbreaking. But the rise in popularity of so-called natural or gentle births, where the focus often becomes ensuring that the mother has a certain type of birth experience, means that we don't always talk about the very real risks associated with pregnancy and childbirth. Though the push for "better" birth experiences is well-intentioned, it means that midwife-assisted birth can end up being seen as something worth striving for no matter what, or something that is inherently superior to hospital births with an OB (in the same way that breastfeeding and vaginal births are sometimes seen as superior to bottle-feeding and C-sections).

Having an OB from the beginning of my pregnancy wouldn't have meant that it would have been any less awful or complicated. But I wish I had at least been able to make the choice about a prenatal care provider with my eyes fully open about the potential for things could go wrong at any point. I wish someone had told me that just as having a midwife doesn't ensure you'll have a great birth, having an OB doesn't mean you'll have a bad one, either. And, ultimately, anything or anyone who can help ensure you and your baby are safe is a really good thing.