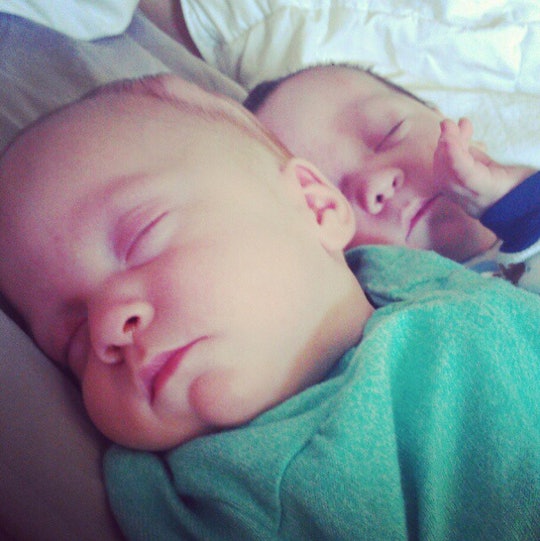 When you have twins, you quickly learn that you will be asked lots of, well, interesting questions on a regular basis. Well-intentioned strangers have asked if twins run in my family (they don't), whether I used fertility drugs (no, but it's none of your damn business if I did), and, strangely, whether my boy/girl twins who look totally different are identical. Normally it doesn't bother me when someone asks that, because I now realize not everyone knows the difference between identical and fraternal twins so they assume all twins are identical. But one person I never imagined would ask me that question? Our pediatrician.

The first time the twins' pediatrician asked me, in total seriousness, whether my children were identical, I laughed it off. But it happened again, months after we'd started seeing him, and by that point, a number of other red flags had popped up along the way. When I retold the story to some other mom friends, they all wondered why I hadn't found another doctor by now, given that I clearly didn't like the one we had. The truth is that it took me far longer than it should have to break up with my children's pediatrician, mostly because I was afraid to trust my own judgment.

He told me that my twins "had that 'preemie look' to them."

When we first starting seeing our pediatrician (let's call him Dr. Confused About Twins), my children were about three months old. They were born extremely prematurely at 25 weeks gestation, and had just been discharged from the NICU after almost four months of non-stop care. My daughter had had two brain surgeries and had a permanent shunt in her head. We were emotionally battered, but we'd made it through — the twins were home and they were healthy, so we were celebrating.

During our first visit, Dr. Confused About Twins seemed surprised about how technical our knowledge was. My husband and I knew all kinds of complicated facts about the twins' medical histories, because that's what life in the NICU is all about. The twins' doctors and nurses and respiratory therapists and pharmacists kept us in the loop about everything that was happening to them and didn't try to dumb it down. But while I expected Dr. C to at least try to understand, it instead felt like he'd decided I was little more than a paranoid new mother who needed to chill the eff out.

As we continued to see him regularly, I found myself getting upset every time I'd drive home, feeling like he wasn't really listening, or like he didn't seem to get that Madeleine and Reid really did have a complicated medical history. And he'd also make comments that didn't sit well with my sensitive new mom heart, like once, when he told me that my twins "had that 'preemie look' to them" (early preemies often develop positional plagiocephaly, and can end up with heads that look longer and more narrow than full-term babies), which, while that may have been accurate, felt like a total jerk thing to say to a mom who wasn't even sure a few months ago if her children were going to live or die.

On top of that, he could never remember which one of my children had the shunt (my daughter), and he thought it was silly that we were giving our son probiotics when he started having trouble digesting his formula and began having blood in his diapers, even though it was something his NICU had suggested (and something which seemed to have had a positive effect). I wanted to tell him that I wasn't being overzealous — I wasn't asking him to prescribe antibiotics for a runny nose, or freaking out about random crap I may have read on the internet one time. We'd been through the ringer, and I wanted him to respect that, and to take my concerns seriously. But he didn't.

Even though I clearly didn't like him, I was uneasy with the idea of being without a pediatrician, because our regular general practitioner had said she couldn't look after the twins if they had preemie-specific issues. I worried not just about ending up with yet another pediatrician I disliked as much as our current provider, but also about ending up with someone who'd then missed out on a few more months of appointments. So I called one of the twins' doctors from the NICU, a wonderful, brilliant doctor I respect and admire, and asked for her opinion. She called Dr. Confused About Twins, and then called me back, and said that, in her opinion as a doctor, he sounded like he really knew his stuff.

He spoke of my daughter so impersonally, right in front of her, like she was a just another patient with a bunch of problems, instead of a beautiful, perfect child who'd overcome more than most adults would ever experience in a lifetime.

"He probably has a bad bedside manner," she explained, "but he asked me important follow-up questions a lot of doctors don't bother to ask, so medically, I think your kids are in good hands."

I thought a bit about what she'd said, and decided that I must have been wrong about him. After all, I didn't really care what he was like as a person so long as he was knowledgeable and thorough as a doctor. I figured I could just brush off his comments, and remember that a doctor I really, really like thought he was doing a good enough job.

As the twins got a little older, our appointments became much less frequent, which was a welcomed change. But after my daughter began walking, the NICU follow-up clinic recommended that she wear a foot brace to help ease some tightness that had developed in her ankle (she has since been diagnosed with mild cerebral palsy). At a checkup appointment with Dr. C, he asked about Maddie's foot, questioning why the NICU clinic would be worried when he thought she was fine. I explained everything they'd told me, everything they were watching for given her medical history, and figured he just needed some more information.

But then he came back in to the room a few minutes later accompanied by a medical resident who was observing patients in his office, and he proceeded to tell her Madeleine's entire backstory as though he'd played a major role in it. Except he explained it totally wrong. He spoke about the tightness in Madeleine's leg as though it was something I had asked his opinion on, when in reality, he only knew about it because I had just told him about it a few minutes prior. He mentioned to the resident that "you could see" that Madeleine had low muscle tone, even though he once told me he "didn't believe preemies were low tone" because full-term babies "just float around in the womb" (...WTF?). And through it all, he spoke of my daughter so impersonally, right in front of her, like she was a just another patient with a bunch of problems, instead of a beautiful, perfect child who'd overcome more than most adults would ever experience in a lifetime. Although we'd had many doctors involved in the twins' care, they'd always reminded us that the medical stuff is secondary to who they are, to how far they'd come, and that no diagnosis or label or delay would define who they were. But with our pediatrician, it felt like he couldn't possibly care less.

After the appointment, the twins and I walked back to the car and I cried. I cried out of frustration, I cried because I felt like I should have changed doctors months ago, and I cried because I felt let down. I'd spend most of my short life as a mother depending and relying on doctors — to keep my children breathing and alive, to keep them from having seizures and brain damage, to tell me what I should do, and how I should go on every day in the miserable reality I was living in. I relied on them to tell me what I should be worried about, and what was best for my children. And even though I didn't need to do that anymore, even though it was my turn to decide what was best, I realized crying in that parking lot that I still hadn't learned how to do that.

In all fairness, I've spoken to a number of mothers who were also patients of Dr. Confused About Twins and they loved him. And I'm sure the doctor I consulted was right, he probably was a good doctor. But he obviously wasn't the right doctor for us. And I should have followed that feeling. I just didn't think I could.

If I could go back, I would have broken up with my children's pediatrician much sooner. I would've bolted as soon as he asked if they were identical, or when he made the comment about their preemie heads. Or when it became clear he didn't seem to understand why the fact that they were born extremely prematurely still mattered to me. Or maybe when he'd ask at each appointment whether I'd put my kids in daycare yet because it's not good for them to "just hang around with mom" all day (thanks, doc).

Back then, I believed that he was the expert, and that I should listen to him. And he was the expert — or at least an expert. He might be the one with the medical degree, but when it comes to being an expert on my children, that's my job. Now I realize, finally, that that job matters too.