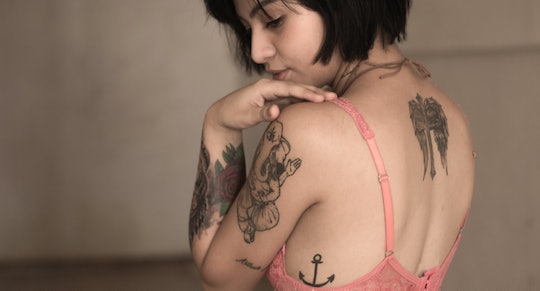 9 Things Moms With Tattoos Would Love To Never Hear Again

Even though, by this point in our history, the idea of a tattoo has definitely evolved, mothers are still shamed for their ink. Sure, many mothers aren't afraid to show their tattoos anymore, but along with being unapologetic and open comes judgement and unsolicited opinions from strangers. Add the Internet to the mix and, well, there's never a lack of criticism.

But the truth is, tattooed mothers are badasses. Whether it's the mom who changed her tattoo to support her transgender son or the mom with the small tattoo who doesn't want to be "inked out" but who wants to pay tribute to her children; mothers are using ink to express themselves as parents, as women and as human beings. In the end, that's all a tattoo is: a form of self-expression and a way to adorn — and, in turn, celebrate — a body that can do some downright awesome and miraculous things.

Which is why hearing unending criticism about being a tattooed mother can get, at the very least, old. I have nine tattoos; some hidden, but many visible. I've had my fair share of stares at the grocery store, while I'm holding my son and flashing the tattoo on my wrist or forearm or shoulder. I've had people ask me inappropriate questions about my tattoos and how they might "come back to haunt me" when my kid is older. I've rolled my eyes so hard that, at times, I was sure they'd pop out of my head.

But until the stigma attached to tattoos completely disappears, tattooed moms are going to keep hearing these nine things. Are we tired of hearing them? You bet. So, if you see a tattooed mom, instead of saying any of the following just, you know, don't.

More Like This
75 Would You Rather Questions For Couples, Ranging From Sweet To Sexy
101 "Would You Rather" Questions For Kids
Pampers Easy Ups Has New Peppa Pig Designs
Here's Why Your Vagina Burns After Sex
What Parents Are Talking About — Delivered Straight To Your Inbox