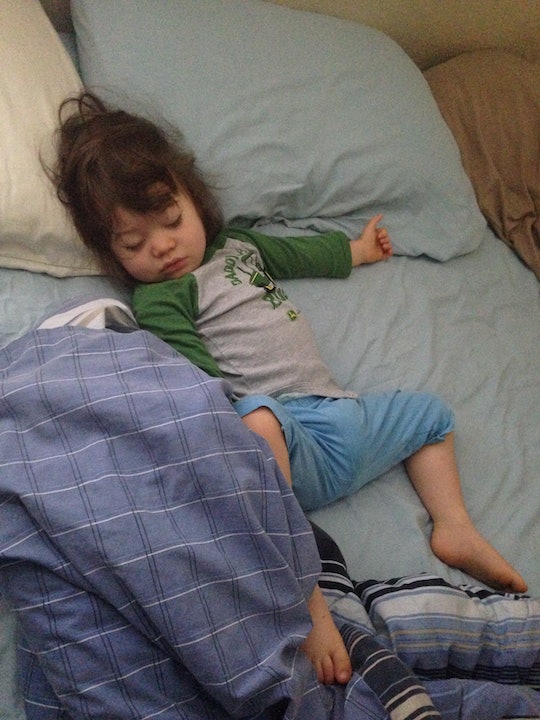 A sad thing happened to me recently. Alright, maybe it’s not sad so much as it is bittersweet. My son, now nearing 28 months, has decided to go back to sleeping in his crib, all on his own. His shift toward independent rest started last week, when we (finally) began a routine regarding afternoon naps. He has quickly learned that lunchtime is followed by a few minutes of free play followed by grabbing his teddy and blanket and plopping onto the living room couch while listening to soft music. After a few days, I brought him to our room and placed him in his crib and told him I’d be right back. Rather than cry, he simply laid back on his pillow, grabbed his blanket and smiled. That’s when I realized that there were things I was going to miss about co-sleeping.

We didn’t start out as co-sleeping and bed-sharing parents. It wasn’t until my son's 10-month sleep regression hit that I began bringing him into our bed so I could actually sleep. The past few months have been admittedly miserable in that my partner and I are constantly being kicked and punched by our 30 pound offspring. While co-sleeping worked for us, it wasn't all fun and games and, well, sometimes I longed for the days when my son would have his own bed and I could have my own peace of mind (you know, one that didn't involve a tiny flying elbow to the face).

However, now that my kid's back in his own bed everything feels pretty strange. There are things I miss about our old routine; things like him sleeping next to me and seeing his little chest rise and fall and smelling his freshly-washed hair. Turns out, the grass isn't always greener on the other side of the co-sleeping fence, and there will be things you'll end up missing, even if you do end up getting your bed back.

More Like This
Should You Swaddle Your Baby In The Summer? Here’s How To Dress Them
Why It's Crucial to Get Good Sleep As A New Mom — Plus, Tips On How To Do It
New Infant Safe Sleep Guidelines From The AAP Discourage Bed-Sharing
The FDA Is Warning Parents To Not Use Baby Neck Floats After One Infant Died