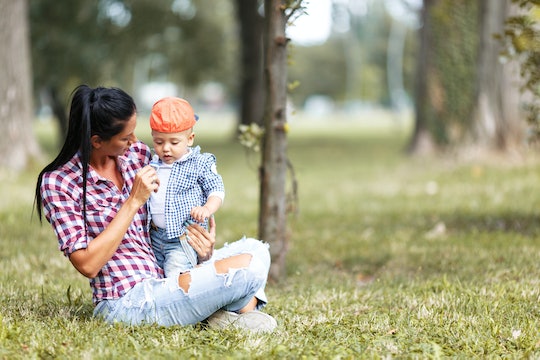 9 Times Parents Tell Their Sons To Be "Brave," But Not Their Daughters

I realized that men are asked to be brave when women are not, when I was just six or seven years old. My brother and I were both playing in our backyard, and we both got hurt. I ran to my father, crying, and was quickly consoled and told everything would be OK. My brother (two years my junior) was told to "suck it up" and, at such a young age, I realized there are times parents tell their sons to be "brave," but not their daughters. I realized that I was able to be afraid or scared or in pain, but my little brother wasn't; all because he was a boy and I was a girl.

That seemingly small moment has forever altered how I perceive masculinity in our culture, especially what has now been referred to as "toxic masculinity." What our culture considers acceptable for men and women are why things like rape culture and the pay gap exist, and I'll be damned if I contribute to either when raising my son. Which is why I rarely, if ever, tell my son to "be brave." Usually, when that sentiment is uttered in a little boy's direction, it's really someone saying, "suck it up," and "don't act like a girl, act like a man." This sends two extremely dangerous messages; one, that women are inferior by default (a "fact of science" according to some men I've had the displeasure of talking with on the internet) and to act like a woman would be to act like a lesser human being. And two, that my son cannot and should not experience every aspect of his humanity, because it makes him appear "weak" and that's the worst thing he could be; an actual human being.

So, while I in no-way think that bravery is a bad thing or something to snide at, I do not expect my toddler son to act like anything other than a toddler. I want him to be a complete human being, who isn't afraid of the emotions that show vulnerability and empathy. That's why you'll never hear me tell my son to be brave in the following situations: