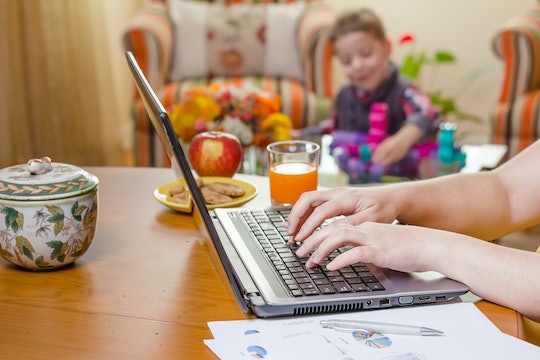 If you decide to go to work and/or continue to work after you've had a kid, you'll inevitably be asked, "How do you do it?" While gender stereotypes are bending if not (finally and officially) breaking, the idea that a woman can have a successful career and be a successful, loving and attentive parent is still somewhat of a myth, at least according to a patriarchal culture that demands women lose all sense of self the moment they procreate. Every grown-ass woman knows this, which means there are certain ways a grown-ass woman handles her career after kids. Call them productive necessities, if you will.

Honestly, choosing to work after I had my son wasn't that difficult of a decision. I knew I wanted more than just motherhood, and needed more if I was going to feel good about myself and my life and my potential future. It was also a decision that toted a rather unhealthy amount guilt and shame and a steady stream of judgement from others (mostly mothers, unfortunately) who didn't return to work after having a baby. Some days it was difficult to put on my big girl pants and move forward with my career, but when I was offered my dream job in a new city and moved my family across the country, I was able to see just how beneficial working and parenting was going to be; not just for myself, but for my almost-two-year-old son. He is happy and thriving and is growing up in a wonderful environment that consists of two parents who are working hard to provide him with everything he needs. Honestly, it's a little difficult to feel guilty about that.

And of course, thankfully, I'm not alone in my decision to work and parent. An estimated 5.1 million married mothers make more than their significant other, and approximately 40% of households with children boast mom as the primary income provider. Being a working mother is no longer a "taboo" life-choice (or, at the very least, no longer completely unheard of) regardless of the relentless judgement and shame many working mothers face on a daily basis. In fact, choosing to work and parent has proved beneficial for children, as daughters of working mothers make an estimated 25 percent more than daughters of stay-at-home mothers. Which is why any grown-ass woman is going to handle the, "How do you do it?" question with as much ease as she handles any other intrusive, slightly condescending question that she's undoubtably (and unfortunately) grown accustomed to.

So, with that in mind, here are nine ways a grown-ass woman handles her career after having kids, because there are multiple ways a woman can be a #boss.