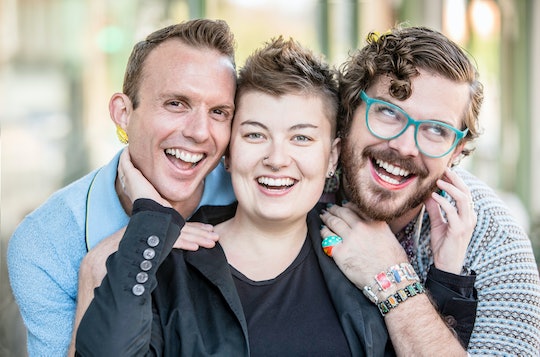 How My Family Detached From The Gender Binary

The feminism I grew up with was racially intersectional, meaning there was an understanding that white women and women of color have different experiences in this country. Therefore, our feminist fight for liberation must include the liberation of women of color. However, my intersectional feminism was still lacking. You see, dear reader, gender roles were questioned only as they applied to cisgender individuals. The feminism I grew up with was ciscentric, meaning it completely erased transgender identities. So,the ways my family detached from the gender binary have been a slow and steady, but necessary process. In fact, we continue to do so on a daily basis.

One of the many dangers of cisnormative feminism is what's developed into Trans-Exclusionary Radical Feminism (TERF). This belief system fully buys into the notion of the gender binary, as aligned with the sex you were assigned at birth based on the appearance of your genitals. The problem, however, is that even though the binary fits for a lot of people, it doesn't fit for everyone. Whenever a certain group of people is actively excluded from liberation movements, they are put at risk for increased dehumanization and, therefore, violence. The eradication of the gender binary isn't to take someone's identity from them, especially if they fit inside said binary. Instead, it's to protect those who don't from discrimination, marginalization, and violence.

In our house, we call bullsh*t on thinking that feminism can be exclusionary and still be called feminism. By it's definition feminism, must be intersectional or, I believe, it's not feminism. Gender roles are not just damaging to cisgender women and cisgender men, they are damaging for all of us within the vast gender galaxy. If you're anything like me, when you start to look at the rules of the gender binary they all become pretty silly. Here are just a few of the ways my family are saying goodbye to the silliness and detaching from the gender binary entirely: