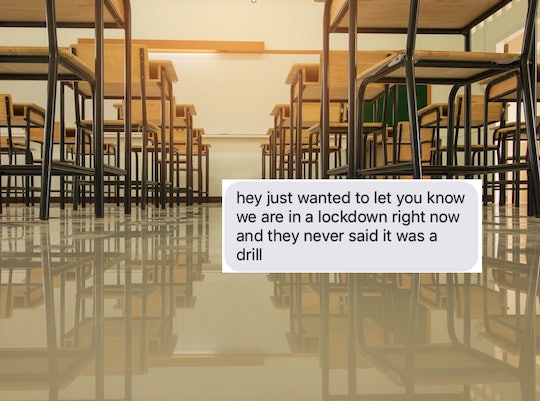 A Mom Got This Text From Her Kid During A School Lockdown, Because This Is Life Now

If you have kids in school, chances are they've taken part in lockdown drills. In fact, more and more states are making it a mandatory practice; but what happens when it isn't just a drill? Just this week, a 14-year-old texted her mom goodbye during a school lockdown, because apparently, this is our reality now.

Lockdowns, as The New York Times put it, "have become a fixture of the school day, the duck-and-cover drills for a generation growing up in the shadow of Columbine High School in Colorado and Sandy Hook Elementary School in Connecticut." Since these deadly shootings, school administrators across the nation have collaborated with police departments to come up with intricate plans in case disaster strikes.

Young students are instructed to hide silently. Teens are told the glow from the screens of their cellphones could wind up making them targets. School administrators call the police while students and teachers cower in darkened and barricaded classrooms, ready to throw objects at an armed intruder if needed. (Or in the case of a drill, just hanging out and waiting until they're given the all-clear.) Since the shootings in Newton, Connecticut, in December 2012, efforts to lay out detailed plans of action have only grown, according to The New York Times.

In the wake of the worst mass shooting in modern American history, one mom's tweet hits home — and hard. A Seattle mother named Kristin took to Twitter to share a series of haunting texts she received from her 14-year-old daughter Tuesday morning. It's something no parent ever wants to experience.

"My 14yo texted me goodbye, in case her school lockdown ended badly," Kristin tweeted, along with a screenshot of her daughter's messages. "This shouldn't be her world. I'm so sad for us all."

Thankfully, it turned out students weren't in any immediate danger. The lockdown was a precaution, as she explained in a tweet, since there were shots fired in the neighborhood.

Still — the chilling message obviously shook this mom to the core. And who could blame her?

This mom's experience has clearly hit a nerve with others. As you can see, Kristin's original tweet has been re-tweeted more than 2,500 times and liked over 4,300 times. Many of the responses have been eye-opening as well.

"This exchange made me realise just how different things are in the USA," a Twitter user from England wrote. "Hope things turn around over there."

"This gutted me. Took my breath away. This is not right, not right at all," another commented.

Another mom hit the nail on the head, writing, "It's so sad this is what so many are ok with instead [of] any gun law reform." Because yes, lockdown drills can be lifesaving in the event of an armed intruder. But you know what else could be? Laws making it impossible for people to gain access to assault rifles in the first place.

My first-grader has participated in lockdown drills at his school. I hate that he even has to do this — but I feel a tiny bit better knowing there's a procedure in place for dealing with danger if, god forbid, something were to happen. Still, the thought of my child hiding in a dark classroom, ready to throw things at a potentially-armed intruder is a terrifying one. Heck, my son telling me about the drills is scary enough as it is.

Until politicians get serious about gun safety legislation, I guess lockdowns will have to suffice. And I can't speak for other parents, but the system in place right now is definitely not OK with me and things needs to change — fast.