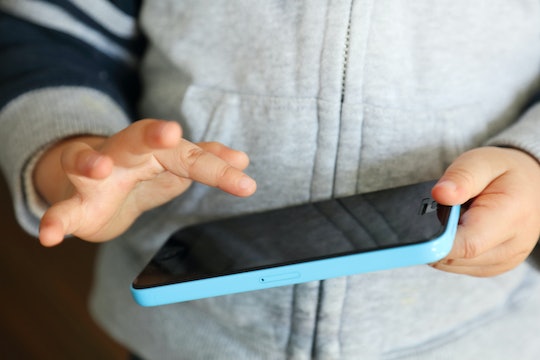 It's pretty annoying when you incorrectly type your iPhone password one too many times and accidentally lock yourself out of your phone for a couple minutes. Now, imagine locking yourself out for several decades. Unfortunately for one mother, she was recently the victim of such iPhone drama when her child got his hands on her phone. That's right: a 2-year-old boy locked his mom's iPhone for more than 47 years.

The mother and son in question are from China, and her last name is Lu, according to the Global Times. The 2-year-old was playing with his mom's phone when she discovered he had accidentally tried an incorrect passcode way too many times. "iPhone is disabled, try again in 25,114,984 minutes," read the notification on Lu's phone, the Chinese tabloid reported. That translates to approximately 47.78 years.

Lu reportedly brought her phone to an Apple Store in Shanghai to see if there was a way around the lockout, and unfortunately the technician did not have great news for her, according to Newsweek. The technician said that the only way to unlock her phone would be to conduct a factory reset, which would wipe every trace of data from the device. “In this woman’s case, the only way out [without waiting] is to erase all the phone data and do a factory reset,” said Wei Chunlong, the technician Lu reportedly met with, as noted by Newsweek.

Lu's phone was not backed up, so she was hesitant to erase her data. "I don't want to wipe my phone, but I can't wait 40-plus years either," Lu told Pear Video, as reported by the Global Times. She decided to wait a while and see if the iPhone lifted the 47-year sentence. As it turns out, this phone lockout happened back in January. Now, two months later, her phone is still locked. Um, yeah, that makes sense, as only two months, not 47 years, have passed.

And while this is a pretty rough predicament, wiping your phone clean is definitely a better option than waiting around phone-less for nearly half a century. Not to mention, the situation could have been way worse. "I've heard of even worse cases, like 80 years," Wei Chunlong explained, as per the Global Times. Or, even worse, the phone could have been destroyed altogether — I definitely wouldn't put it past an innocent toddler to accidentally drop a parent's iPhone in the toilet, the tub, or in a puddle.

As the South China Morning Post pointed out, this story has caused people in China to debate what the best way to prevent this lockout would have been: either backing up her phone, or prohibiting her child from using the phone. Since the rise of technology (namely, handheld technology), there has also been a rise of screen time-shaming, in which people make parents feel bad for allowing their children to use iPhones, watch TV, and engage with screens in any other way. Shaming a parent for distracting their kid with a smartphone is never OK, as each parent makes the best decisions that work for their family and there are some benefits of screen time for kids. That being said, there are also risks to having too much screen time, according to experts, such as headaches, trouble sleeping, and sudden mood changes.

So while handing your kid a locked iPhone may seem like a good way to distract them without them being able to go through your phone, it turns out that it's definitely not. So what can parents of iPhone-infatuated children do to avoid this problem? The answer here is pretty clear: Always back up your iPhone — especially if you have a determined child, like Lu's.