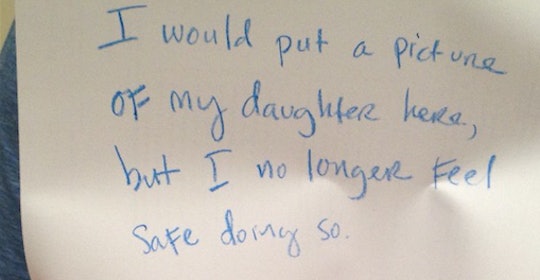 Imagine you just had your first child. You're so proud of all you went through for her to become a reality, and you truly understand why she's called a miracle. You share photos of her with everyone you see, and like most new parents (especially those who regularly use social media), you post pictures on every feed, board, and blog you have. Now imagine that one day you wake up to someone who's posted a photo of your baby when she was just two minutes old with a caption that expresses a desire to rape her. This exact horror happened to my family in December, when a child porn site reblogged a photo of my daughter.

My wife and I have had our own Tumblrs for years, and have become so entrenched in the community that we've developed real-life friendships with many other people we've met there. For us, our Tumblrs are great ways for each of us to express ourselves, and we both value the creative freedom the platform affords us. But because we each have an established social media presence, we discussed at great lengths prior to her birth how we would handle our baby when it came to the Internet. We agreed that we never wanted to post images of her in the tub, in her bathing suit, or in any stage of undress. We also agreed that we thought it was unrealistic to not post any pictures of her or not share any details about her because we like being a part of Tumblr and various social media platforms. We really just wanted to document this amazing person we are so in love with.

I could never, ever have possibly imagined in my worst nightmares that there would be someone out there who could look at that image sexually.

Looking back, we thought we were smart for discussing all of this before she was born. But after my wife proudly linked to one of my Romper articles, "I Had a Baby, & Seven Weeks Later I Lost My Job," on her Tumblr that used a main image of our baby just minutes after being born, someone reblogged the post and expressly said that they wanted to violate her. Specifically, they wrote that they'd like to "f*ck her in the ass."

The photo I used to illustrate my article was extra meaningful to both of us: it was actually the first photo ever taken of her. I snapped it in the operating room exactly two minutes after our daughter was born, which is why she's lying naked on an exam table surrounded by OR gowns and white surgical gloves, her skin still ever so faintly blue, her eyes not even open yet. Yes, she's naked, but her legs are still tucked in the fetal position and it's a profile shot so you can't see anything from her tiny round belly down. I could never, ever have possibly imagined in my worst nightmares that there would be someone out there who could look at that image sexually.

Even as I write this now, I am paralyzed by my anger. The rage I felt when I saw that post first thing in the morning — bleary-eyed from lack of sleep, yet still able to half-stumble, half-run to our bathroom to interrupt my wife's shower so I could show her — still lights a fire in me months later. In my entire life I've never wanted to hurt someone more. I could not, and still cannot, comprehend how someone could say something so vile about any helpless baby.

I will be haunted by what I saw for the rest of my life.

Things got worse after the initial shock. Not only was the description of the site listed as "dirty, dirty daddies," but many of the other images on the Tumblr featured children as well, though none as young as ours. Had I eaten that morning, I absolutely would have thrown up. I will be haunted by what I saw for the rest of my life.

The first thing we did was check on our daughter. It was as though an unspeakable monster had managed to worm its repugnant way into our home even though our doors were locked and our windows were shut. We felt tremendously violated, and the only thing we could think to do was to make sure she was safe, even though we logically knew she was peacefully asleep in her bassinet. Then my wife contacted Tumblr and explained what happened while I Googled "how to report online child pornography," which was something I could hardly believe I was typing. My search led me to the National Center for Missing and Exploited Children (NCMEC), where I shakily filled out an online form to report the incident. I couldn't believe that at the end it said, "information will be made available to law enforcement for possible investigation." "Possible investigation"?

How do you fight something you can't see? It's like fighting a ghost.

In my mind, there should be no "possible" investigation since a crime — one of the worst transgressions imaginable — was absolutely committed. "Pending" investigation, yes. But, "possible"?

I reached out to the NCMEC to find out why an investigation on their part wasn't a given, and it turns out that they're not actually an investigative agency. Created in 1984 by John Walsh, the host of America's Most Wanted, after his son Adam was abducted and murdered, the NCMEC is a nonprofit that acts as a "clearinghouse" of information. They review what is sent to them and try and figure out where the incident occurred, while also making all information available to law enforcement. Every single tip (in 2015 their cyber-tip line received a staggering 4.4 million reports) that comes in is made available to national agencies like the FBI, Homeland Security, and the U.S. Marshals Service, as well as local agencies, if applicable. They never purge or delete any records. I was also impressed to learn that companies like Tumblr are required by law to report to the NCMEC cyber-tip line. I asked the organization's spokesperson if there was any more that I could've done in my own situation, and he told me that "dual reporting" to both the NCMEC and the blogging site like we did is the best course of action to take.

Thankfully Tumblr responded to my wife within five hours with a brief message stating that they had “terminated” the blog.

I was relieved, but the blog's removal didn't mean any real consequences for the perpetrator, and I didn't know how to bring any about. We asked a friend who is a cop what course of action we could take. Should we file a police report? He said at that point it would be difficult for any local law enforcement to do anything. After all, I didn't have concrete, tangible information I could take to them. It's not like we know anything about this person other than his or her Tumblr name. We do employ an analytics tool to monitor our own Tumblrs, but it really only works if you know when the activity happened. Since this horrible act occurred while we were sleeping, we have no way of knowing when exactly it was posted. This is just one of the things that makes online pedophiles extra terrifying. How do you fight something you can't see? It's like fighting a ghost.

Since it happened, I've done nothing but blame myself. I'm the one who chose to use that image for my essay. I'm the one who asked my wife to share it on her Tumblr in hopes of promoting my work ... I failed to protect our child.

Our friend also reiterated what the NCMEC had told us and said that since Tumblr took the site down, by law they're required to report it to the Feds, as well as give them all the information on the person who created the Tumblr handle. So I sent Tumblr a follow-up message asking what further steps they were taking on their end and what their policy is. It took a couple of weeks longer than I would have hoped, but a Tumblr spokesperson finally assured me that they did report the blog and all pertinent information to the National Center for Missing and Exploited Children. In the end I was impressed by and grateful for everything Tumblr does to make sure this doesn't happen, even though I wish they'd been a little quicker and warmer in getting back to us.

A slightly more sympathetic response would have helped mainly because we were getting so little sympathy and understanding from elsewhere. To our horror, friends have all but said this was our fault for putting our lives online, and since it happened, I've done nothing but blame myself. I'm the one who chose to use that image for my essay. I'm the one who asked my wife to share it on her Tumblr in hopes of promoting my work, something many professional online writers do. I have been wracked with guilt over feeling as though I failed to protect our child. We haven't even told our parents yet because I can almost hear the chorus of, "Why do you have to put yourself out there so much?" and the self-hatred will begin all over again.

In mid-December, Mark Zuckerberg posted a photo of himself and his newborn daughter who’s wearing nothing but a diaper. While I’m obviously not Mark Zuckerberg, it somehow made me feel better to see someone who is clearly well aware of what dangers exist online do what so many of us who are trying to parent in the age of social media do: take pride in our children and our families. It’s the digital equivalent of whipping out your wallet to show friends and acquaintances alike the worn and oh-so-loved photos of your children.

My wife and I have yet to take our Tumblrs down, and, yes, we continue to post photos of our daughter on various social media outlets. We have, however, started digitally scrubbing the tags off the images we post on Tumblr. I've spent several hours removing hashtags like “newborn, “adorable baby,” "baby smiles," "new mom," and even gone so far as to remove baby product names because I am now wary of all possible search words pedophiles look for. I used to love to tag photos with her age (i.e. "2 weeks old") for posterity purposes, but I started worrying that it makes it even easier for them to find children of specific ages so I edited those hashtags to make them more obscure. For now, we believe the course of action we’re taking is not only the wisest for the protection of our child, but also what's best for our own family. We will not be made to be afraid of what’s out there, but we will do our best to navigate the murky waters and eventually one day show our daughter how to best steer her own way through.

I’m still incredibly angry, and I still feel guilty. I look at our girl, blissfully unaware of anything other than the recent discovery of her ears and her love of clapping, and worry that I have failed her already. But I know deep down that this is not our fault. We are not wrong for sharing our joy. The only wrong here lies with the individual who verbally violated my child. And they know who they are.

More Like This
Paris Hilton Is Officially A First-Time Mom
When Does A Baby Recognize Their Father? A Pediatrician Explains
Chrissy Teigen Shares First Photo Of Esti & Now We All Have Baby Fever
Celebrate Your Baby’s 1st Valentine’s Day With These Instagram Captions
What Parents Are Talking About — Delivered Straight To Your Inbox