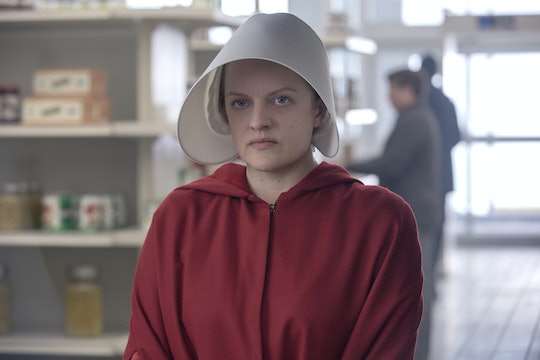 The Handmaid’s Tale Season 3 has presented a bevy of problems for June (Elisabeth Moss), followed by solutions, thanks to her resourcefulness and inability to give up, even when people around her are dying or warning her about the risk. It’s why fans have come to love June and root for her, but it could be what leads to trouble for her if this Handmaid’s Tale theory about June in the Season 3 finale has any merit.

On Reddit, a user by the name of Shnili posted their theory that June will make good on her promise to get the children out of Gilead in the Season 3 finale. She will even watch the plane fly away, knowing she made an impact for the greater good of the innocent people of Gilead. But as June and viewers at home watch the plane take off and fly toward Canada, June will be shot by one of the guardians who chase June, the Marthas, and the children to the plane.

The theory goes on to say that June being shot in the season finale will set things up for the Season 4 premiere. According to the theory, when we pick back up with June next season, she will be in a Mayday camp being cared for in the name of the resistance rather than a Gilead hospital or at the Red Center. This will enable June to continue her work with the resistance, but from the inside and away from Boston. According to the Redditor’s theory, the setting would then shift to Chicago.

It’s not the wildest theory I’ve heard about how The Handmaid’s Tale Season 3 will end. It makes sense that the season will end on a cliffhanger, as both of the first two seasons did, with a little closure and another storyline up in the air. Having June transported to Chicago also makes sense, since it would make it possible to bring Nick (Max Minghella) back into the fold.

Since Nick was relocated to Chicago as a commander earlier this season, he hasn't had as prominent of a role in June’s life. Because of that, she has been forced to make change without his help and honestly, she has done a decent job without him. But fans haven’t forgotten the good Nick did when he was more of a main character and if the plan is to bring him back to the show on a more full-time basis, bringing June to Chicago after getting shot makes sense.

The theory also means June will have been punished, in a way, for her crime against Gilead. She has had the thickest plot armor out of almost anyone on the show up until this point. It would make sense for someone to take her down after all she has done that has gone against Gilead beliefs. It might also quiet down some skeptical fans who are tired of seeing June get away with literally everything.

According to IMDb, the Season 3 finale is titled "Mayday," which also supports this theory. Maybe it doesn't necessarily mean that June will be shot. It does, however, point to the Mayday resistance group playing a big role in the finale. They already will, thanks to all of the Marthas working with June to get the children out, but the title could also reference where June is headed once the plane takes off.

I would love to see June get out of Gilead with the Marthas and 52 children, but at this point, it wouldn't make sense for her to leave without Hannah (Jordana Blake) when Hannah is her sole reason for getting these kids out in the first place. The Reddit theory about June getting shot keeps her in Gilead, but also makes her more important to the movement. And really, all that June has done has led her to this point.

Although Marthas have been visibly annoyed with June since she stopped being polite and started being real, it hasn't deterred her from urging them to work with her. She even became a pariah among some of the other handmaids because of the trouble that seems to follow her. But June has continued to try and fight for herself, her daughters, and now the other children who were forced into placement in other homes with other families while their parents were killed or enslaved.

It’s only natural that June’s next step would be to work with Mayday officially rather than in a way that could step on the group's toes. Getting shot at the end of Season 3 gives the season a classic Handmaid’s Tale cliffhanger while setting things up for June’s future underground. Until the season finale, however, all fans have is the hope that June will live to see another season with her world class plot armor and that her plan for these child refugees won't have been for nothing.