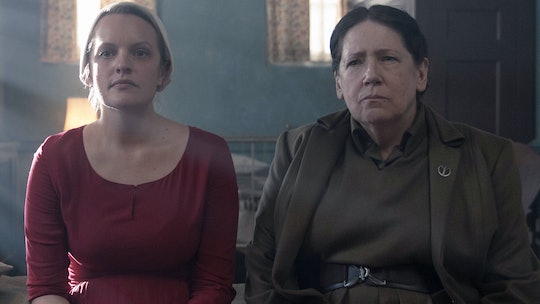 With Season 3 of The Handmaid's Tale premiering its tenth episode on Jul. 24, fans have been growing impatient as the double digits indicate the finale is coming up fast. And yet, there is no end in sight. The show's third season will have a total of 13 episodes, which means viewers have three more to go until a yearlong drought. But with The Handmaid's Tale Season 3 finale air date just around the corner, fans still have a million unanswered questions, and it seems likely that they won't be resolved until Season 4.

With an episode count of 13, the third season finale of The Handmaid's Tale will premiere on Aug. 14. But with the 10 episodes that have aired thus far — including a backstory to Aunt Lydia and a bottle episode almost entirely dedicated to Elisabeth Moss' face — this season hasn't seen much action, despite the "blessed be the fight" slogan stamped to it in previews.

It's possible the writers have intentionally slowed the pacing of The Handmaid's Tale Season 3. In an interview with The Hollywood Reporter, showrunner Bruce Miller revealed that the entire series could be 10 seasons long. But more recently, Miller explained that they don't want the Hulu series to "overstay their welcome."

"When we get to the end of Handmaid's Tale, I want it to be a beautiful piece of fiction, like the book, that you put a little bow around and you can put it on your shelf next to the book, and that it feels like a story well told from beginning to end," Miller told THR. "Going beyond that time? I'm not interested."

Regardless, the third season has a lot of work to do in the next three weeks, and hopefully, fans will get a few questions answered by the time The Handmaid's Tale Season 3 finale is released. Until then, let's dive into what we don't know.