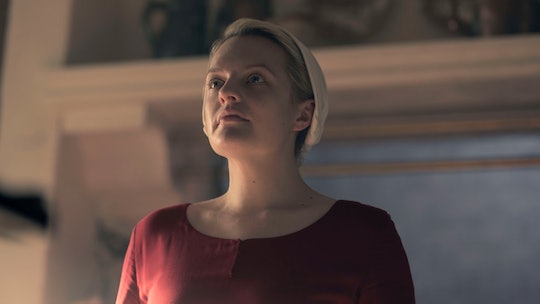 June has been through hell and back on The Handmaid’s Tale and it looks like she’s in for more hardship in Season 3 before she can really spark change with any kind of revolution. One season might not be enough time to really make a shift in the way things are, so how many episodes is Season 3 of The Handmaid’s Tale? Season 1 was just 10 episodes, but Season 2 had the addition of three more on top of that and it looks like the show will get a similarly long order each season from here on out. According to TVLine, Season 3 is also 13 episodes long, which could either give June more time to be beaten and belittled or more time to rally other handmaids and Marthas into changing Gilead for the better.

Right now, things are looking grim. When Season 2 left off, Emily and June’s baby were both making a run for the Canada border and June had stayed behind to try and find Hannah to take her out of Gilead with her. I can’t imagine what June’s future is going to be once Fred finds out what she did and once Serena sees that June didn't save Nichole herself as she had promised to do. There might be 13 episodes to get June to Hannah and get them both out of the country, but something tells me it’s going to be a long road until she gets to that point.

The Season 3 trailer definitely made it seem like Gilead is on its way to a revolution with June at the helm and although change might be slow in the making, The Handmaid’s Tale creator Bruce Miller told Us Weekly ahead of the Season 3 premiere that June’s sights are set on making a difference.

"She’s coming back with an active, positive agenda. She wants to do something. You don’t stay back not to do something," he revealed. "I think she’s energized to act, to rise up to become a fighter, to become a resistance." But, he noted, this revolution also means June questioning herself at every turn and hoping that her decisions really are for the good of everyone and in the best interest of reversing all of the changes that Gilead brought.

Miller also said that Season 3 will delve deeper into June and Serena’s relationship and explore how they might be able to work together, if at all. At the end of Season 2, the women seemed like they were on the same page in standing up for the rights of Gilead women, but Serena has always been hard to read. She could do another 180 this season.

Yvonne Strahovski, who plays Serena, did tell Entertainment Weekly that there is "new territory" between June and Serena. "June is an inspiration for Serena along the way," Strahovski said. "There are these moments where she’s empowered her." Maybe that means that there actually is hope for Serena as part of the resistance after all.

One the one hand, 13 episodes could be enough time for June to start to make a difference and work with the same Marthas who helped Emily and Nichole escape at the end of Season 2. Then again, if the first few episodes set up the season, that leaves just 10 to unpack everything else and start an all out war. I don't see Gilead crumbling just yet, especially since this is just the third season, but by the end of these 13 episodes, I could see there being a glimpse of the beginning of the end.