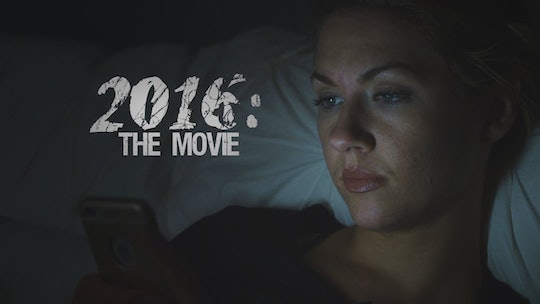 We've got three days left in this year and by now, we can all admit it: 2016 has been an absolute garbage fire. Between heartbreaking and unexpected celebrity deaths, one of the most tempestuous and hotly contested presidential elections in American history, and horrific human rights violations taking place all over the world, this past year has certainly seemed to be worse than most. When you think about it, the sheer amount of terrible and shocking events all taking place within such a short time frame is terrifying. Now, a comedy sketch group has given 2016 the horror movie trailer treatment, and it's equal parts funny and unsettling.

Friend Dog Studios, "a KCMO comedy studio run by Brian Huther, Ben Auxier and Seth Macchi," put together an impressively professional-looking faux-trailer fo 2016: The Movie. The two minute clip features many of the most ridiculous and "Wait, did that seriously just happen?" newsworthy moments from the past year.

Set to a traditionally spooky horror movie soundtrack, the trailer opens on "home video"-style footage of a couple celebrating the last New Year in their new house with friends. At first, it seems like this is going to be your standard found footage haunted house fare, but it's quickly revealed that the true villain isn't any ghost or demon, but actually the twelve grisly months of 2016.

There are quick flashes of some of the most prominent celebrities who have died throughout the earlier part of the year, including David Bowie, Prince, Gene Wilder, and Muhammad Ali. Then, a guy on a phone incredulously informs his friends that "they shot a gorilla" (referencing the infamous Harambe incident) before a mysterious figure slips in front of him. Hilariously, a female protagonist remarks that they're not dealing with a "what" but a "when."

Things just get zanier as the group attempts to figure out the connection between all of the celebrity deaths (spoiler: there is none), and an attempt at calling for help leads to a hand scalded by an exploding cell phone. Really, it's as fitting a metaphor for the overly plugged-in aspect of 2016 as any.

Brexit and the U.S. presidential election ("It's only locker room talk!") also earn mentions before Carrie Fisher's recent death is announced, prompting the characters to decide to "fight back" against a personified 2016 in a hoodie and mask, armed with weapons. Throw in a creepy child's a capella version of "Auld Lang Syne" paired with "2016's" promise that "we're just getting started" with the horrors and you've got yourself a grade-A fright fest. Too bad it's all real.