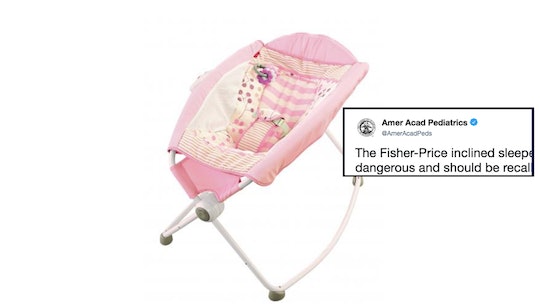 On April 5, the U.S. Consumer Product and Safety Commission (CPSC) issued a joint safety warning with Fisher-Price about the Rock ‘n Play Sleeper, urging parents not to use this particular product once an infant can roll over, or at 3 months of age. Days later, on April 9, the American Academy of Pediatrics (AAP) said it wants Fisher-Price Rock 'n Play Sleepers recalled immediately and has strongly urged parents to "stop using the product."

"AAP urges parents to stop using the product immediately. Stores should remove the Rock ‘n Play Sleeper from their shelves," the AAP said in a statement this week. "A warning issued by the CPSC and Fisher-Price on April 5 did not go far enough to ensure safety and protect infants."

The CPSC and Fisher-Price's warning last week stated that "10 infant deaths in the Rock ‘n Play sleeper that have occurred since 2015, after the infants rolled from their back to their stomach or side, while unrestrained. All 10 infants were 3 months or older." Fisher-Price shared a statement on Twitter insisting the Rock 'n Play met safety standards. In the warning, the CPSC and Fisher-Price urged parents to stop using this product "by three months of age, or as soon as an infant exhibits rollover capabilities."

Before the AAP issued its statement, Consumer Reports published an investigation into the Fisher-Price the Rock ‘n Play Sleeper and found "that it is tied to at least 32 infant deaths" between 2011 and 2018. Consumer Reports says its analysis "turned up deaths of babies even younger than the 3-month threshold cited in the April 5 warning, and go beyond the risk of rollover."

In response to the Consumer Reports' investigation, Kyle Yasuda, MD, FAAP, President of the AAP, said: "This product is deadly and should be recalled immediately. When parents purchase a product for their baby or child, many assume that if it’s being sold in a store, it must be safe to use. Tragically, that is not the case. There is convincing evidence that the Rock ‘n Play inclined sleeper puts infants’ lives at risk, and CPSC must step up and take immediate action to remove it from stores and prevent further tragedies."

Romper's request for comment from Fisher-Price regarding the AAP's statement was not immediately returned, but in a previous statement regarding Consumer Reports' investigation, Fisher-Price GM Chuck Scothon said, "The safety of children is our highest priority. The loss of a child is tragic and heart-breaking." Scothon's statement continued:

We stand by the safety of the Rock ‘n Play Sleeper. The product meets all applicable safety standards, including those of the international standards organization, known as ASTM International, and is certified by the Juvenile Products Manufacturers Association (JPMA). We continue to work closely with the Consumer Product Safety Commission regarding the safe use of our products, including the Rock ‘n Play Sleeper. It is essential that the product warnings and instructions are always followed. We will continue to do all we can to ensure that parents and caregivers have the information necessary to create a safe sleep environment for infants.

When asked for comment about the AAP urging for a recall, the CPSC told Romper in a statement:

CPSC has identified a hazard with rollover issues in the Fisher-Price Rock ‘n Play involving 10 infant deaths. We issued an alert warning parents to stop using the Rock ‘n Play sleepers for children 3 months and older or if they can roll over before that age. But our work does not stop there. We are investigating other deaths that have occurred in the Rock ‘n Play. CPSC has requirements it must follow for any decisions concerning recalls. If the evidence shows the need for a recall, we will take that step. We continue to work on this very important safety issue.

Rachel Moon, chair of the AAP's SIDS Task Force, added in the AAP's statement that babies need to rest on a "flat, firm surface" to ensure their safety during sleep.

"We cannot put any more children’s lives at risk by keeping these dangerous products on the shelves," Moon said, urging for a recall. "The Rock ‘n Play inclined sleeper should be removed from the market immediately. It does not meet the AAP’s recommendations for a safe sleep environment for any baby. Infants should always sleep on their back, on a separate, flat and firm sleep surface without any bumpers or bedding."

You can learn more about the AAP's safe sleep practices here.

If you are worried about whether you should continue using your Rock 'n Play sleeper from Fisher-Price, it would be advisable to reach out to your pediatrician or a trusted medical professional for expert guidance as well as keeping all the safety warnings issued thus far in mind.

Editor's Note: This article has been updated to include a statement from the CPSC.

More Like This
Everything Parents Need To Know About Monkeypox
How Hot Is Too Hot For Babies? Experts Weigh In
What To Know About Sex Offenders & Community Notification
Yellowstone's Kelly Reilly Has A Much More "Content" Married Life Than Beth Dutton