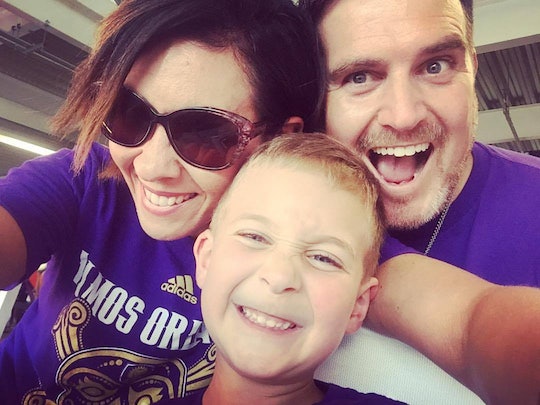 Actually, Having A Baby Saved My Marriage

It was a chilly New Year's morning in 2011 when I stumbled to my bathroom. I'd been up all night with cramps that went from severe to moderate within a few hours. I had no idea that I was pregnant and, in that moment, experiencing a miscarriage. I wasn't surprised by the loss, though. My partner and I had been struggling to have our second child, and I'd lost a pregnancy before. In so many ways we were broken, disheartened, and exhausted. So, yes, having a baby saved my marriage, and I don't think admitting that the birth of our son healed us in so many ways is a bad thing. In fact, I think it highlights the power of perseverance.

Just a few weeks after experiencing my second miscarriage in two years, I sat on the couch to work from home when I noticed a strong metallic taste in my mouth. No matter how much I drank, it wouldn't go away. I was inclined to simply write it off as some strange sensation, but my gut told me I needed to grab the pregnancy test I kept in my dresser drawer. When you've been trying to conceive for so long, you get used to having them on hand. I didn't think I was pregnant, and I was sure I would feel nothing but that devastating disappointment, but curiosity is a very, very powerful thing.

I took the test and it was positive. After visiting my doctor to confirm the pregnancy, I found out it was labeled a "threatened abortion" because there hadn't been enough time between the latest pregnancy loss and conception. My chances of losing another pregnancy were, according to my doctor, rather high. But I held onto hope, white knuckles and all, and at the next appointment I held my breath as the ultrasound technician searched for a heartbeat. And when I heard those small but powerful thuds, I once again found myself sobbing uncontrollably in a doctor's office. Not because I was experiencing another loss, but because I had a viable pregnancy with a healthy, stable heartbeat. I drove myself home in a trance, unsure as to how much faith, and hope, and planning I should put into something that, still, felt surreal and fragile.

My husband and I already had a 4-year-old at the time, and had been together for almost seven years, by the time we struggled to conceive had taken its toll. We didn't talk much, except as parents to our daughter, and sex was something scheduled, not pleasurable. I felt like I had a goal and not, well, a relationship. And as time went on and we continued to struggle with fertility, I started shutting down. I forgot how to lean on my husband for comfort and understanding. He forgot how to talk to me, openly and honestly, about his feelings. I blamed myself for my inability to remain pregnant, and assumed that my partner felt the same. So I wasn't naive enough to believe a baby would fix my relationship. Honestly, I didn't know if our relationship was going to survive, regardless.

I felt like I had a goal and not, well, a relationship.

But my pregnancy ended up testing my marriage in a new way that forced us to grow together. Because while my husband and I were both extremely excited, we were also struggling with the fear of losing another pregnancy, and the shame associated with miscarriage, perpetuated by a culture that stays quiet about a common outcome of pregnancy. We started working on our communication, although it was still pretty nonexistent, and little by little we started to get our relationship back. When I was eventually induced due to amniotic fluid loss, and after a traumatic birth that nearly took mine and my son's lives, my partner and I found ourselves in a new kind of normal. We had made it to the other side of pregnancy loss, and in doing so we transformed our marriage.

Of course, I can't say when things shifted in my relationship immediately. In fact, I think the changes were small and random. There was a shift a week before I was admitted into the hospital, and another when my labor failed to progress. There was another change when my husband watched me briefly lose consciousness the moment our son was born, still and blue. And another shift as we watched, together, the nurses bring our son back to life. The changes were barely noticeable during so much trauma and fear and pain and excitement and love, but they were there, and they helped our relationship move forward.

We had made it to the other side of pregnancy loss, and in doing so we transformed our marriage.

In the months and years since, my husband and I have, like all couples, continued to navigate the ebbs and flows of marriage and parenthood. But making it to the other side of fertility problems proved how much stronger we are together than apart. We endured difficult things, and though the birth of our son wasn't a magic fix, he became another reason for us to forge on. He was a reminder that we must evolve and forgive one another and be kind to ourselves. And after 14 years of being together, and 10 years of marriage, I've accepted the undeniable fact that we're not perfect. We're just the perfect parents, and partners, when we're together.

More Like This
50 Love Song Quotes That’ll Give You The Feels
How To Tell Your Partner You Want to Separate, According To Experts
41 Strong & Sweet Baby Boy Names That Start With “K”
How To Handle It When Someone Criticizes Your Parenting